You are here
Home > Arts > REVIEW: A Gentleman’s Guide to Love and Murder (Tour/State Theatre) 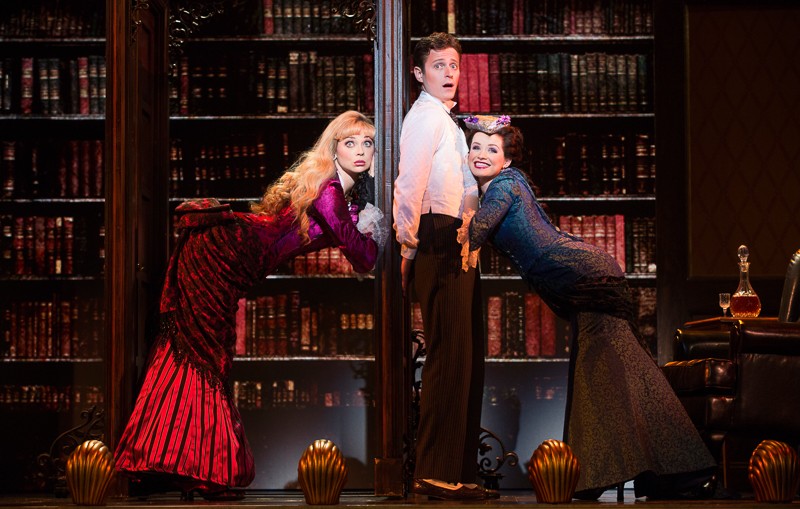 A Gentleman’s Guide to Love and Murder, now playing at the State Theatre in Minneapolis, is easily one of the best musicals to come out of Broadway in the last several years. It is also a breath of fresh air in that theatre world that has become dominated by movie-to-stage adaptations and jukebox musicals that seem to endlessly recycle and trade on nostalgia. Retrofabulous turns and blasts from the past certainly have their place in a theatrical diet, but seeing A Gentleman’s Guide is a wonderful reminder of how good a bonafide new musical can feel. It’s also the funniest show to hit Broadway since The Book of Mormon and happens to be appropriate for all ages.

The central conceit of A Gentleman’s Guide is that the young Monty Navarro (an excellent Kevin Massey) discovers that he’s an unacknowledged bastard child of the fabulously wealthy D’Ysquith family. Naturally, he decides to off them one by one, while also pursuing romance with two lovely and very different ladies – sometimes at the same time. The score by Steven Lutvak is grounded with one foot in the Golden Age musicals of Rogers & Hammerstein and the other in the Gilbert & Sullivan Savoy operas; it’s a combination filled with witty musical pairings, catchy tunes, and moments of unexpected beauty (listen for Massey’s moving rendition of “Sibella” in Act 2). The book by Robert L. Freedman is excellent, and the staging…well, you can see why director Darko Tresnjak got a Tony, a Drama Desk Award, and an Outer Circle Critics Award from it. (The show was nominated for 9 Tonys and took home 4.)

There are four principal actors in A Gentleman’s Guide: Massey, Kristen Beth Williams (Sibella Hallward), Adrienne Eller (playing Phoebe D’Ysquith), and John Rapson (playing a whole succession of D’Ysquiths). A decided treat of the show is seeing who Rapson will show up as next – a whole cavalcade of hilarious portrayals, each offed in an ingenious variety of ways (another treat) and clad in a distinctive costume that will make you wonder how many dressers are waiting to pounce backstage for the next quickchange. It’s a role that requires aplomb and an impressive instant command of different mannerisms, all of which Rapson hits throughout the show.

As the titular homicidal gentleman, Massey is charismatic and endearing, compelling and drawing; his singing voice shines in the patter song “Poison in My Pocket” and is silkily seductive in the sumptuous “Sibella.” Speaking of Sibella, Williams’ voice is rich and lovely, and if fans were still in style her chemistry with Massey might make you start fanning yourself. Eller’s classically trained voice has a rich vibrato and presence that makes you wish that Lutvak had composed another song or two for her.

This is a show that rewards repeat viewings. That the original Broadway production is closing January 17 is most unfortunate, but while the tour is in town you just might want to catch it twice. The tour hits some different (and often bawdier) beats than the original production in New York, so if you can see both.