It’s no longer warm outside and the weather feels awfully frightful, but it is officially spring – and spring gala season. Coming up this weekend is the annual benefit for PACER, the Minnesota Parent Training and Information Center. 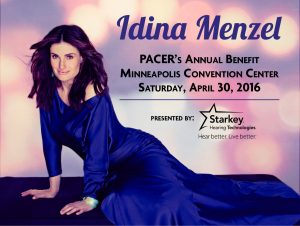 This year’s PACER Annual Benefit features the three-time Tony Award-nominated and one-time Tony Award winning singer-actress Idina Menzel. Menzel debuted on Broadway in the original cast of the musical Rent in 1996, playing Maureen; this debut role earned her first Tony Award nomination.  In 2003, she originated the role of Elphaba in Wicked, winning the Tony Award for Best Actress in a Musical. She reprised the role of Maureen in the 2005 film adaptation of Rent and headlined several tours and satellite productions of Wicked. She also appeared in the 2014 production of If/Then. She was a recurring character in the TV show Glee.

Even if one does not know Menzel’s name or other work, any parent with children today will recognize her as the voice of Queen Elsa in the blockbuster Disney movie Frozen. Much-imitated but never matched, her rendition of “Let It Go” won the 2014 Oscar for Best Original Song, sold nearly 11 million copies, and accumulated more than 1 billion views on YouTube. Her role in Disney’s Frozen makes her a perfect performer at a fundraiser for children with disabilities.

The timbre of Menzel’s singing voice is sometimes classified as mezzo-soprano; her belting soprano has become one of the signature stamps of American musical theatre today. Stephen Holden of The New York Times described Menzel in 2014 as a loud, “full-volume soprano” and”a primal cry embedded in her being that insists that we listen and pay attention.” As a headline attraction, she has sold out theatres and concert halls across the country, and was hailed by the Denver Post’s John Moore as “clearly the Streisand of her generation.”

Idina Menzel sings “Let It Go” at the 2014 Oscars ceremony.

The PACER Annual Benefit takes place at the Minneapolis Convention Center on Saturday, April 20. The gala begins with a silent auction at 6 pm, continues with a live auction and concert starting at 8 pm, and concludes with an afterparty.