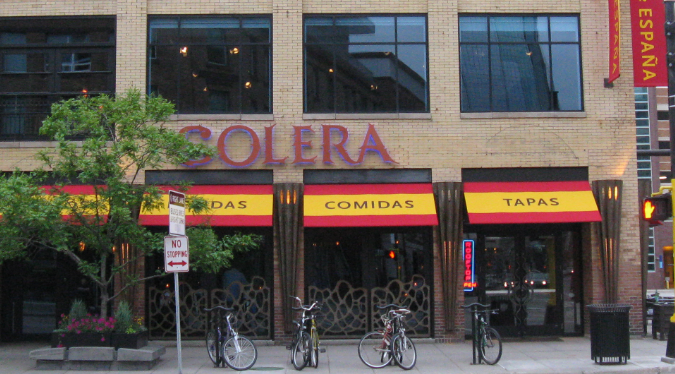 The Hennepin Theatre Trust announced on Friday that it had reached an agreement with the City of Minneapolis to purchase the former Solera building (900 and 906 Hennepin Ave.) in downtown Minneapolis. This purchase marks HTT’s latest step in expanding its role as a curator of the downtown entertainment engine, above and beyond its role as a content presenter.

For 20-30-somethings and transplants, it may be hard to imagine that Hennepin Ave was once filled with crumbing buildings and vacant storefronts – and vacant theatres. Nowadays, Hennepin Ave is a bustling place from Loring Park to the Mississippi; by the 1980s, however, the hollowing out of American industries from offshoring spurred a massive suburban flight. One by one, the old ladies of Hennepin Ave architecture fell to demolition, regardless of historic value, spurring public outcry and inspiring the City of Minneapolis to acquire the State Theater, whose renovation as part of the LaSalle Plaza redevelopment (completed in 1990) marked a turning point in the historic preservation movement.

The Hennepin Theatre Trust as we currently understand it was formed in 2000, consolidating several efforts to preserve and revive theatres downtown. Bob Dylan and his brother David Zimmerman had purchased the Orpheum Theatre in 1979, reviving it as a destination for touring musicals, and sold it to the Minneapolis Community Development Agency in 1988; a 5-year renovation saw a revived theatre opening with much of its original decor in 1993. The Pantages Theatre, owned by movie theatre mogul Ted Mann (after whom a concert hall at the University of Minnesota, his alma mater, is named), was rescued from an attempted demolition in 1996 and acquired by the City of Minneapolis. The extensive renovation for the then-crumbling structure took until 2002 to complete; restoration efforts were fueled by bonds issued by the city that were transferred to the Trust to oversee, payback, and retire.

Since its formation, the Hennepin Theatre Trust has also worked to expand its role as a curator of the entertainment engine driving downtown’s revival. One of the more visible steps was completed in 2011, with the completion of the New Century Theater, providing a more intimate venue that has become a go-to place for small companies offering plays, musicals, and jazz concerts. The Trust has also functioned as an anchor tenant and lead organizer in Minneapolis’s WeDo Cultural District, and in a stream of public art projects. Acquiring the new space will consolidate the Trust’s footprint, expand offices with convenient access to its primary venues, and insulate the organization against external rent increases.

The acquisition and renovation of the old Solera building is expected to cost $3.3 million, including a $2.8 million eight-year loan, a $250,000 grant, and a $250,000 cash payment. The Trust plans to pay off the loan via a special fundraising campaign. The closing date has been set for Friday, Aug. 19, and the Trust expects to move its offices into the space in mid-2017.