The Mosh Pit in Shaping Sound.

You could feel the exuberance in the audience even before the house lights went down for Travis Wall’s Shaping Sound: Dance Reimagined at the Ordway Music Theater. This was understandable: artistic Director Travis Wall began as the runner-up in the second season of Fox’s So You Think You Can Dance and last year won the 2015 Emmy Award for Outstanding Choreography. Along with co-creators Teddy Forance, Nick Lazzarini, and Kyle Robinson, Wall launched this dance company during the run of their reality show All The Right Moves on Oxygen. The end result is Shaping Sound; one could feel the devotion, especially from some of the younger fans and aspiring dancers themselves, all the way to the back row.

This is a troupe of excellent dancers with top-notch skills, both in expression and technique, down to a member. While the thrumming adoration of superfans elevated the energy of the performances from the beginning, the dancers lived up to their hype. Dance Reimagined is a fusion of modern, jazz, and hip-hop dance styles, created and choreographed by Wall, Forance, Lazzarini, and Robinson. In two acts, the show consists of loosely connected vignettes, each showcasing the group’s individual and ensemble excellence. One minor weakness comes in the framing, really—the action follows a young woman from her modern-day relationship woes into an Alice-in-Wonderland-type dreamscape that helps her find her way from a bad man to a good one. However, the eagerness to see the different genres of each piece and the talented performers make the flimsiness of the storyline hardly worth noting.

The real strength of the show is its choreography, especially when the ensemble is together onstage. It is one thing to showcase a dancer’s crazy good technique in a solo or pas de deux situation, but it is quite another to create expressive and complex collective movement where everyone might be doing something different, yet it coheres into a beautiful whole. The dancers explore different ways of moving together—not just unison, not just contagion, but sometimes just with a subtle ripple of energy the audience can follow from one end of the stage to the other. The show is full of youthful exuberance, for sure, but it is also clever, continually surprising, and entirely satisfying. 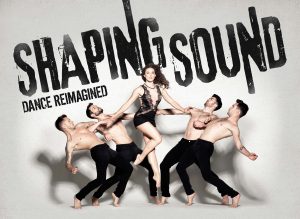 As might be expected with a television pedigree, the performance is not without its bells and whistles. The movements explore the ways the dancers interact with one another, but also the way they interact with the light and space onstage. Even the set pieces are mobile, becoming part of the shapes the dancers create onstage rather than just a backdrop for them. It is this skillful fluidity and inventive choreography that allows the production to pack in the crowd-pleasers and some of the flashier elements without seeming gimmicky. Fans of the various television shows that incubated this group no doubt already knew what a pleasant punch it might pack, but the high level of artistry and thoughtful use of production elements won over the uninitiated, too.

Plus, sometimes when life is getting you down, there’s nothing like a line of guys on stage dancing and rocking out to “Bohemian Rhapsody.” Shaping Sound: Dance Reimagined captures the joy of being a dancer, which was only reflected and amplified by the eager young members of the audience. With never a dull moment, this show is a pleasant surprise.

Lydia Lunning
Lydia Lunning is a Staff Reviewer at the Twin Cities Arts Reader. A singer, dancer, and staff member at Walden University, she previously worked as a freelance editor and was on the editorial staff of the Cricket Magazine Group. She holds an MA in English literature from the University of Minnesota and a bachelor’s from Oberlin College.