It’s half past midnight in Minneapolis.  We had a big snowfall this afternoon and now the streets are icy and 17 degrees Farenheit. Most people here went to bed hours ago but the 6 playwrights who are participating in The 24 Hour Plays, hosted by Hennepin Theater Trust, are just getting started.  Let’s wish them luck (and lots of above-average coffee). They’ve  only got to 8:00 am to polish off 6 plays (one each) after which they get to go home and rest, and the collection of 30 or so actors and directors who have dedicated their time and talent to this wonderful event divide up and begin rehearsing.  They have until 6:00 pm to have their lines memorized and their blo 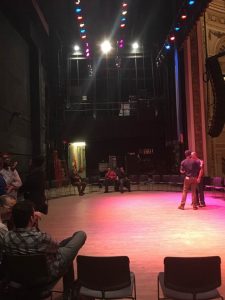 cking down. That includes an hour for lunch.  Then it’s dinner and back to the Pantages for make-up, costumes, and voila!  At 8:00 pm sharp, the curtain goes up on six spanking new plays.

What motivates so many talented  playwrights and directors and performers to volunteer their time and energy to this grueling process?  In a word, it’s love. The 24 Hour Plays is a nonprofit, NYC-based production team that engages teams of artists to create short theatrical work in 24 hours.  In past years they’ve held the event in New York, L London, Los Angeles, Chicago, Dublin and Germany and have raised millions of dollars for charities all around the world. Proceeds from the Minneapolis performance go to support Spotlight Education — the flagship education program of the Trust that engages Minnesota high schools in the performing arts — and scholarships for students enrolled in the University of Minnesota-Duluth School of Fine Arts.

Some great people there tonight.  Justin Kirk was one of them and he was kind enough to talk with us.  Here’s my interview with Justin (I got a little shy). #24HRMPLS Movie on 3-12-17 at 9.58 PM