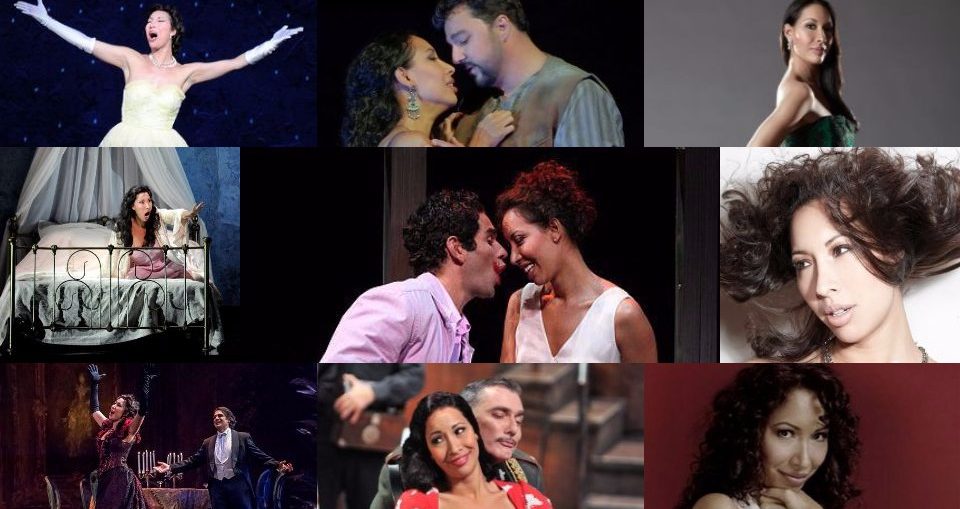 A photo collage of soprano Nicole Cabell on- and offstage. See the original photos and more at Nicole-Cabell.com.

Two weeks from today, Minnesota Opera opens the last production in its 2016-2017 season: Giacomo Puccini’s classic opera La Bohème. The opera’s flowing, through-composed score and concise verismo narrative originally took audiences aback; within a year, however, these same qualities – and some of the most beautiful melodies Puccini ever composed – made it an international hit. Since then, La Bohème has become one of the most-performed operas in the world, as well as the inspiration for the Broadway musical Rent.

The heart of La Bohème‘s story follows a pair of romances and their twists and turns: the often-embattled love between the embroiderer Mimì and the poet Rodolfo, and their opposites the painter Marcello and singer Musetta. Soprano Nicole Cabell has played both Mimì and Musetta onstage, and spoke with the Arts Reader‘s Basil Considine about returning to Minnesota Opera to sing Mimì.

When in your life and career did you first discover La Bohème? What was your initial reaction to the music?

I first listened to La Bohème when I was a student at the Eastman School of Music. Initially, I wasn’t as taken by the music as I had been with Puccini’s Madama Butterfly, Tosca, and Turandot, but that is simply because I responded to darker, more dramatic music at the time.

I always thought the story of La Bohème was very simple, and the music very pretty, but beyond that I wasn’t drawn to it. It was only when I started singing Mimì that I truly fell in love with La Bohème. I’d sung Musetta, the other female role in La Bohème, many times and it was quite fun – but it was nowhere as deep and fulfilling as Mimì.

Mimì is now my favorite heroine to sing, and La Bohème is amongst my favorite operas. There is an honesty and vulnerability to all of these beautiful characters that renders them immediately endearing.

Many voice teachers have strong thoughts about when their students should first tackle Puccini’s music. When did you, and was it with your voice teacher’s support?

Musetta is tricky, and I wasn’t always successful singing her, as there is a steely quality one needs to cut over the orchestration. Mimì’s long lines makes such a task easier, but Musetta’s lines can be speech-like, almost chirpy, and I was sometimes covered by orchestras led by conductors who didn’t bring the sound down enough for me or in houses that were too large. I keep this in mind when I teach, and introduce Puccini’s songs (with piano) to young singers before most arias.

Singing careers often look very linear to the outsider while being full of twists and turns. What are some important milestones, experiences, and achievements in yours?

Careers are never linear, and mine is no exception. I credit the combination of hard work and good luck in the formation of my career, almost with a slew of wonderful advisors and teachers.

The biggest milestones for me were the completion of my bachelor’s degree at the Eastman School of Music, my acceptance into the Ryan Opera Center at Lyric Opera of Chicago, the BBC Cardiff Singer of the World win, and my recital recording with Decca.

In-between these achievements I had many smaller successes and failures. For instance, I failed to advance to the finals of the Metropolitan Opera Auditions two months before winning the BBC Singer of the World. I sang many roles for the first time that have become staples for me, but have also taken on the odd role or two that just didn’t fit, and derailed me here and there. Fortunately, I always got back on track, which I suppose is the key to longevity.

Are there specific people who stand out in your career as mentors, and if so, why? Who were your key influences?

I’m very honored to count many advisors, teachers, and mentors in the formation and continuation of my career. My first teachers, Linda Brice and Vincent Sorisio, gave me the foundation on which I’ve built everything. Marlena Malas, whom I met at the Chautauqua Vocal Institute, and the late John Maloy at the Eastman School of Music, were wonderful voice teachers during my younger years.

Currently, I see Julia Faulkner and Gianna Rolandi for necessary checkups. Matthew Epstein was a great advisor for me through my twenties. I met Marilyn Horne at the Ryan Opera Center years ago and she provided thoughtful, encouraging advice immediately following the wild years after my Cardiff win. I’m extremely lucky to have a great relationship with my manager, Michael Benchetrit, who is perhaps my greatest mentor and advisor.

My warm up routine changes from day to day. I do the basic breathing exercises and body warmups that many singers do, and the day of a show I’ll usually do a 45-minute yoga routine. I used to need half an hour of warm up, but now I’m usually ready in 10 minutes, which is one advantage of getting older and knowing your voice.

Of course, it depends on the role. If I’m singing something that lies quite high in the voice, I’ll need a little more warmup time, and I’ll spend more time opening up the top of my voice. A role like Mimì doesn’t require too much warm up, and one shouldn’t warm up too much, as her vocal line lies lower in the voice. I suppose the most important adjustment I make on performing days is simply to refrain from speaking too much, which is the most tiring thing for the voice.

Is there a new opera (written in the past five years) that you especially enjoy and recommend?

I have to say I’m terrible at recommending new operas, as I don’t sing or listen to many of them! I quite enjoy American Music Theater, and as a result I gravitate toward the composer Ricky Ian Gordon, who composes classical music with a hint of the more popular style. Lori Laitman is another wonderful composer who is having a lot of success with her opera The Scarlet Letter.

What’s up next for you?

I’m lucky to follow this La Bohème with another La Bohème at Cincinnati Opera. After a summer singing concerts at the Oregon Bach festival and the Bard Festival, I return to the role of Contessa Almaviva in several productions of Le Nozze di Figaro, along with a very interesting project in Amsterdam. The Dutch National Opera is presenting a baroque opera entitled Eliogabalo by Cavalli, and I’m excited to premiere the role of Flavia.

Glancing at your last few seasons, there are a number of cities and opera houses that you’ve visited with some regularity. This will be your second time singing with Minnesota Opera – are there any things that you are especially looking forward to doing in your off time?

I quite enjoy Minneapolis, and I’m looking forward to exploring some of the small neighborhoods off the beaten track as well as more natural attractions. If the weather becomes conducive, I’d love to take some day hikes, and I hear Afton State Park is nice. I’ve been to the Mall of America and intend to go quite a bit more!

If time permits, I may have to explore several of Minneapolis’ famous breweries.

Where is home for you? How regularly do you get back to it, and what are some of the creature comforts that you especially enjoy when you’re there?

I currently live in Chicago. I moved there in 2002, and it is now officially my home.

I believe Chicago is one of America’s truly great cities, and honestly, I’m never bored there. I have a position at the DePaul School of Music now and will hopefully spend more time in Chicago as a result. Weather being what it is, I spend a lot of time indoors, exploring museums, shopping, or catching one of the Broadway in Chicago shows we are lucky to have.

Because I’m so often on the road, when I’m home my favorite thing to do is simply be in my condo, enjoying the comforts at home, and seeing friends I so often can’t see.

In a 2014 interview, you mentioned that you were heading towards lirico-spinto repertoire. With the acknowledgement that voice classifications are not all-encompassing and intended in part for convenience, where is your voice and repertory focus now? How has that evolved in the past ten years, and has that affected what roles you’ve accepted and pursued?

I think my voice is less inclined toward the heavier repertoire than I want, but I still am taking on some bigger roles. Mimì and Violetta may be the heaviest of my roles, and I don’t see myself moving into the big bel canto repertoire or grander Puccini and Verdi heroines. What is important is that I keep the lighter roles on my calendar, especially if I’m singing Puccini.

Throughout the next couple of years, I am repeating Contessa Almaviva, Mimì, Violetta, Micaëla, and other roles that are staples of my repertoire, peppering these performances with lighter baroque roles as well as the occasional dip into something heavier.

Minnesota Opera’s La Bohème opens May 6 and plays through May 21 at the Ordway Center for the Performing Arts in St. Paul, MN.