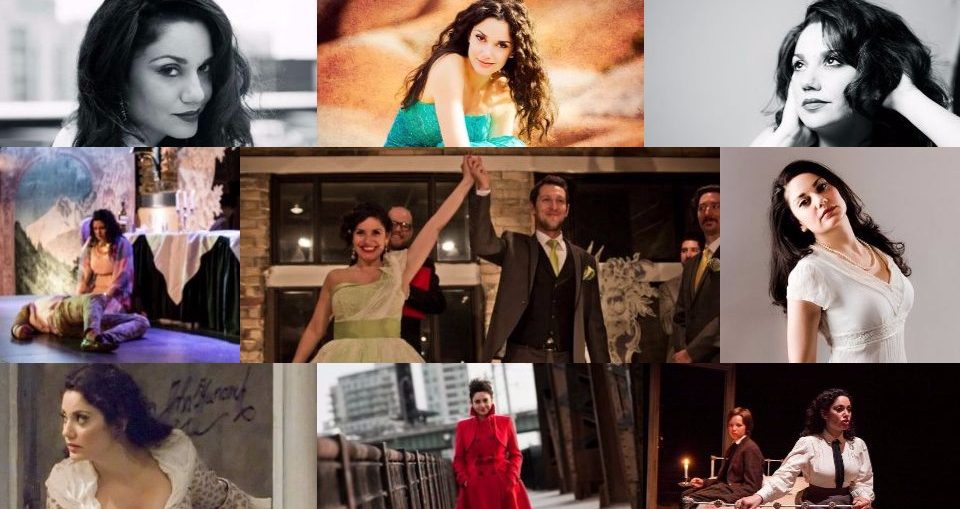 A photo collage of soprano Miriam Khalil. See the originals and more at MiriamKhalil.com.

The economics and programming of opera during the so-called Golden Age of Opera – the mid-19th-century up to the start of the First World War – were very different than they are today. Most opera companies operated on a repertory model; if a new opera did not perform up to expectations, it could be cancelled outright and the following day’s performance substituted with a crowd favorite. Principals and chorus members were thus expected to know and be ready to sing multiple roles on a moment’s notice.

With the notable exception of the Metropolitan Opera, very little of American opera today operates on this older repertory model. Instead, most American opera companies use fixed schedules each season, with a strong emphasis placed on the talents of specific star singers, who are brought in and not closely associated with (or tied to) specific opera houses.

One of the reasons for the old repertory model’s popularity was that it allowed an opera company to avoid “dark nights” without performances, without also tiring out its star singers with back-to-back engagements. If the leading soprano fell sick, for example, La fille du régiment could be temporarily swapped for La chaste Suzanne, a comedy of similar character. Or, to balance audience tastes, nightly opera goers might be treated to a farce one evening and a tragedy the next, all at the same house.

Singing over a full orchestra without amplification in a theatre of 2,000 or more seats is also exhausting. Rather than program other works (with different leads) on alternate nights, most American opera companies today use a different approach: double casting. In double casting, some or all of the principal parts alternate performances. This allows returning audiences to experience contrasting – and, sometimes, radically different – interpretations of a favorite show. In Minnesota Opera’s upcoming production of La Bohème, the role of Mimì is double-cast, with sopranos Nicole Cabell and Miriam Khalil alternating in the role.

Lebanese-Canadian soprano Miriam Khalil spoke with the Arts Reader‘s Basil Considine about her career, encounters with Puccini, and more.

When in your life and career did you first discover La Bohème? What was your initial reaction to the music?

La Bohème was the first opera I ever saw live and also the first role I was given professionally outside of being an understudy or a young artist in an opera apprenticeship program. The first time I heard La Bohème, I was still new to opera and didn’t really connect to the music. I connected to the characters and the story. However, when I listened to it again and again (following that first time I saw and heard it), I found myself moved to tears (the ugly kind) – not by the words, which I couldn’t quite understand, but by the music, which described them so perfectly.

I still find myself getting lost in it. There’s nothing like it.

Many voice teachers have strong thoughts about when their students should first tackle Puccini’s music. When did you, and was it with your voice teacher’s support?

I sang Mimì for the first time in my late twenties. My teacher at the time said to me, I’m happy for you, but I wish it was three years from now. She gave me her blessing because she understood that it was a dream come true for me to sing Mimì, and I promised to sing it with the voice I had then, not the one I thought I’d have three years later.

Singing careers often look very linear to the outsider while being full of twists and turns. What are some important milestones, experiences, and achievements in yours?

This is a big question. Here are three: Going on as Cleopatra cover in David McVicar’s famous Giulio Cesare at Glyndebourne Festival Opera in the U.K.; singing on the Metropolitan Opera stage in the semi-finals of the Met competition in New York City; and working on the song cycle Ayre with Osvaldo Golijov, performing it numerous times this past year. This piece has changed me as a singer and I don’t think I will ever find anything like it – it’s a once in a lifetime thing, if you’re lucky.

The biggest milestones in my life, though, have been personal ones: getting married and having my son. My husband is the most patient person I know. I watch him with our little one and I’m in awe. Everything changed after having my son and my entire world shifted, in a good way. I’m a better person because of my son, and I’m so grateful for him and the thoughtful and loving person he is becoming (even though it means less sleep!).

Are there specific people who stand out in your career as mentors, and if so, why? Who were your key influences?

Two people stand out to me: My first voice teacher when I moved to Toronto, Jean MacPhail, and my current voice teacher, Wendy Nielsen.

When I moved to Toronto, I knew almost nothing. I had done a bachelor’s degree in a small program in Ottawa and I was nervous. All I knew was that I had a voice and I was ambitious. Jean tried to teach me patience, she was calm and unconditional and she believed in me.

Wendy Nielsen has had a great career both as a singer and as a teacher. I’m still learning from her, but she is amazing in that she can take any singer and work with what they have and help them develop the tools to help themselves. She’s incredibly positive and giving. Her heart is so open and her genuine commitment to helping singers find their unique voice and navigate their way through proper technique and healthy career choices is really admirable. She also managed to have a family and not one but two amazing careers as singer and teacher.

It varies significantly because life is never what it is the day of a show. Like many, I juggle family and singing. However, what is the same is that I love to warm up by doing stretches and going for a walk, then singing for 15 to 20 minutes. On days of shows, I make a point to have downtime to be alone and to focus. Drinking a chai latte is a must.

Is there a new opera (written in the past five years) that you especially enjoy and recommend?

Thumbprint by Kamala Sankaram and Susan Yankowitz. This piece is about Mukhtar Mai, a victim of rape in Pakistan. When she brought her attackers to justice she couldn’t read or write, so she signed her name with a thumbprint. When her story became known internationally and money was sent to help her, she opened schools in her village for girls so that they may never have to sign their name with a thumbprint. It’s powerful, beautiful, and it’s a true story.

You’re a founding member of the chamber opera company Against the Grain Theatre. AtG is also doing La Bohème this May. Is this coincidence? Serendipity? Conservation of artistic energy?

Total serendipity. La Bohéme was the first opera we did with Against the Grain Theatre. Adam Luther (one of our Rodolfos here in Minnesota) and his beautiful wife, soprano Laura Albino Luther, sang Rodolfo and Mimì in that first production. It was so well-received that we did it again that same year six months later.

Well, it has been six years since then and people have been asking about it – so we’re bringing it back. The shows are totally sold out and we’re already wondering when to do it again!

What’s up next for you?

Last year, I sang Osvaldo Golijov’s Ayre at Banff Centre, the Ottawa International Chamber Festival, and at the Ismaili Centre with Against the Grain Theatre. I’ll be going to Buenos Aires to sing it [again] in July.

You’re involved with a fair bit of new music. What sort(s) of stories, characters, and music would you like to see more of in new operas, and why?

I’d like to see more operas about political and social justice. We have plenty of topics to choose from and it helps us empathize on a different level. I love stories and characters. I find often new music gets caught up with trying to be new music. I love when it can take you somewhere and make you feel something. It’s a vehicle to another level of emotions. When that is combined with a good story, I’m in all the way.

In a 2015 interview, you mentioned that your voice transitioned to full lyric soprano after having a baby. What was your post-pregnancy singing process and transition like? Was there any time off in the last trimester, or did you keep singing all the way up to delivery?

I was a light lyric with a darker tone and amazing low notes. It was confusing to everyone and in my early days many thought I was a mezzo. That changed after the baby but my voice was already on it’s way there. I didn’t take any time off. Somewhere in my 6th month, I took a 1-month break because acid reflux was really bothering me, but I had two concerts in my 8th and 9th months that both went really well.

My first performance post-pregnancy was five weeks exactly after having my son, and then I was in rehearsals for Susanna in Le nozze di Figaro in my 6th week.

Some of the early career singers that I work with (and, especially, women) relate feeling caught between pursuing their musical career and having children. How do you balance these demands?

From the very first memories of my childhood, I loved to sing. It’s all I ever wanted to be and this hasn’t changed. I also remember wanting a family and never really thinking anything of it. I wanted both.

There are sacrifices and it’s a constant juggle. When I think of all the things I have to do in a day, I get overwhelmed, but when I’m simply doing the very things I was overwhelmed by, it’s not so bad. I love being a mom, and I love singing. I’m a better mom because I’m happy and because I love sharing what I do. I’m a better artist because of perspective and permission that I have learned to give myself.

The one thing I tell myself is that I have to be strong if I want to get what I want done. There is always a way, and I will find it. I’m not unique in this; so many singers are parents. We just have a bit more on our plates and that’s more than okay because we love it.
—

Minnesota Opera’s La Bohème opens May 6 and plays through May 21 at the Ordway Center for the Performing Arts in St. Paul, MN.