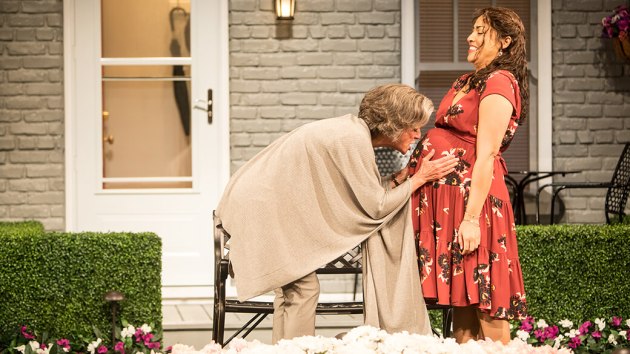 Editor’s Note: The run of Native Gardens at the Guthrie Theater has been extended by one week due to popular demand. The show now ends August 26, 2017.

Native Gardens is a 2016 play by Karen Zacarias. The show had its original premiere at the Cincinnati Playhouse in the Park under the direction of Cincinnati Playhouse’s artistic director Blake Robison. Robison also directs the Guthrie’s production with two well-known Minnesota actors playing two of the four leads. Robison’s direction succeeds in bringing forth both the play’s gentle and outrageous humor.

The play concerns a young couple who have bought a fixer-upper in an upper-middle class neighborhood in Washington D.C. The Del Valles are the newcomers: the husband, Pablo (Dan Domingues), is an immigrant from a rich Chilean family. He graduated near the top of his law class in America, but was cut off from his family when he married Tania (Jacqueline Correa), a PhD student from New Mexico. The story opens when the two are settling into their new home and Tania is about eight months pregnant.

To impress the partners at his law firm, Pablo offers to host a party at his new home that week despite the fact that the house is in need of much repair and he has not cleared it with Tania. Overwhelmed, Tania proposes they have a barbecue in the backyard which she asserts she can transform into a native garden within six days. As part of the garden plans, Tania wants to replace a broken fence with a larger wood fence, which she feels she should clear with her next-door neighbors Frank and Virginia Butley. Frank (Steve Hendrickson) is a retired government employee and Virginia (Sally Wingert) is a gender-pioneering engineer with a defense contractor. Virginia continues to work while Frank spends his days fastidiously tending his backyard garden which he unsuccessfully enters every year into the neighborhood gardening contest.

The two couples spend a pleasant evening together, even though Frank and Virginia make incorrect assumptions like that Tania and Pablo are from Mexico. Although Frank’s garden is to be evaluated for the annual garden competition the day after the Del Valle’s party, he is fine with the new fence going up. The awkward goodwill between the two couples rapidly falls apart, however, when Pablo discovers that 2 feet of Frank’s precious garden is actually on Pablo’s side of the property line. Although the two women initially try to be peacemakers, they end up adding fuel to the feud. Much of the humor in the show comes from each couple using flowers as a metaphor to spout off about racial and class stereotypes about the other.

Correa is the anchor of the play who, except for occasional lapses, is trying very hard to be understanding regarding the Butley’s feelings while she tries to calm Pablo’s fury. Domingues is frequently hilarious as an over-the top lawyer who equates expanding his yard as a blow against Manifest Destiny. Wingert goes from a slightly snobbish matron to a chainsaw-wielding fanatic with her usual comic touch. Hendrickson successfully plays his role of a retired civil servant who has become so zealously devoted to his garden where it is entirely feasible to the audience that he will die of apoplexy if his garden is tampered with.

Scenic designer Joseph Tilford effectively conveys the personality of the two couples with his depiction of their houses and yards. The newcomers have a rundown house with a majestic oak that fuels the Del Valle’s dreams of a native garden with indigenous plant life. In contrast, the Butley’s house and yard is immaculate and strewn with imported European flowers. To them, indigenous plants are better known as weeds. Even without meeting the couples, the audience instantly has a feel for the clash that is inevitable.

The ending of the show is the only drawback to this hilarious show. Its climax was reminiscent of an old I Love Lucy episode. The show goes to great length to show the escalating conflict, but how the couples reached a successful resolution of their conflict is not dramatized. Instead, the aftermath is told in an epilogue format. With such wonderful writing in the first 90% of the show, there is the nagging feeling that with a little more writing effort the audience could have witnessed an even funnier resolution.

Native Gardens plays at the Guthrie Theater’s McGuire Proscenium Stage. Its run has been extended through August 26, 2017.