A photo collage of the recipients of the Arts Reader‘s awards for the 2017 Minnesota Fringe Festival.

The annual Minnesota Fringe Festival floods Minneapolis with an 11-day deluge of theatre, music, dance, spoken word, and (as they say) something different. Roughly 800 performances (a few were washed out by rain) filled those 11 days, divided between 167 shows. If you didn’t have to worry about travel, parking, or eating breaks, it is still physically impossible to see more than a third of the shows.

Assessing these shows is no small effort. Before the festival opened, the Twin Cities Arts Reader staff poured over every show description, image, preview trailer, credit, and other information that was posted to the show webpages. During the festival, individual staff members polled street contacts, followed word-of-mouth, and frequently changed plans to seek out shows that were popular, resonant, fresh, or controversial. Some of these shows were reviewed in this publication; others were reviewed by colleagues at other publications. A very small subset of shows gets singled out for special recognition by our staff.

These are the recipients of the Twin Cities Arts Reader‘s 2017 Fringe Awards:

The list of award recipients only partially overlaps with the top-grossing show list. As in 2016, only four of this year’s awardees received encore performances (A Pickle, Blackout Improv, DUNGEON, The Memory Box of the Sisters Fox). Four were solo shows (A Pickle, Out of the Shadows, PHD (Po H# on Dope) to Ph.D., There Ain’t No More!). 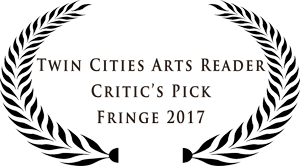 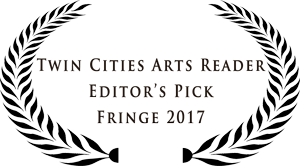 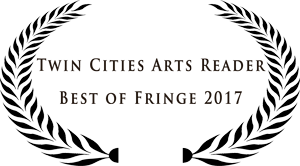 “This show sets your expectations on their head and gives them a spin. The use of mime, shadow puppets, and light to transform the space into their canvas is extraordinary.”

“Their improvised comedy has a rare depth as it touches on social justice issues, stereotyping, and more while still also being engrossing and funny.”

“The truth, heartbreak, and twisting turns of real life in this powerful solo show are far more fascinating than any novel.”

The Memory Box of the Sisters Fox, presented by The Winding Sheet Outfit

“A splendid, poignant, and non-traditional piece that is powerfully performed by delightful ensemble of women.”

“Arguably the hardest show to get into in Fringe. A timely tale of how prejudice and bias can be deeply embedded in our happy heritage.”

“A solo musical powerhouse that puts larger shows to shame with Willi’s virtuosity, flexibility, and ability to pull you into a story of time running out.”