You are here
Home > Arts > PREVIEW: <em>One-Third of a Nation</em>: The Doom of the Federal Theatre Project 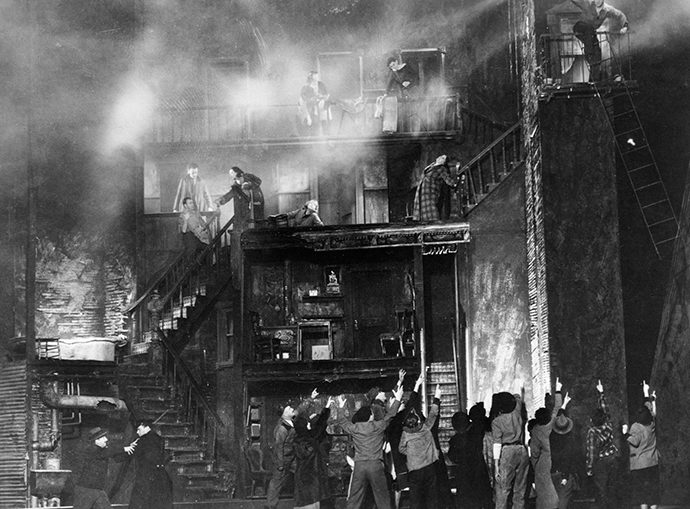 A tenement apartment burns in the opening scene of One-Third of a Nation in the play’s original 1938 production. Photo courtesy of the Library of Congress.

It’s easy to see why the 76th Congress was upset with the play One-Third of a Nation. On the eve of World War II, fascist movements across the world were sweeping into power on winds of populism. Once a fascist government was appointed or elected, it quickly used the machines of government to stoke the populist fires and consolidate its control. One-Third of a Nation, a high-profile production by the Federal Theatre Project, struck many as a piece of political propaganda using federal dollars to promote Franklin Delano Roosevelt’s political agenda. The resulting controversy over the play – by many measures the most popular of the FRP plays – ultimately killed the Federal Theatre Project.

By the time One-Third of a Nation hit the stage of the Adelphi Theatre in New York on January 17, 1938, the Great Depression was 8.5 years’ old. The second stage of FDR’s New Deal legislation had provoked an economic recession within the depression in 1937, with manufacturing levels shrinking back to their 1934 levels. As unemployment soared again, Roosevelt’s popularity began to erode across the populace – even as he pursued even more sweeping social re-engineering. Members of both the Republican opposition and fellow Democrats in Congress began to voice concerns about the President’s agenda and overreach.

While FDR is still broadly considered one of the best U.S. presidents of all time, his administrative tenure and policies includes many actions that typified authoritarian states of the period. He presided over one of the largest expansions in the history of the U.S. federal government, sweeping uses of presidential power, and interventions into the lives of citizens. The 1933 seizure of all privately held gold in the United States has striking parallels with the North Korean government’s 2009 re-valuation and re-issue of the won, which essentially allowed the government to seize private savings. The Social Security Act was deeply contested and challenged, with the Supreme Court ultimately finding in favor of the act using arguments that today recall the Court’s rulings on constitutional challenges to the Affordable Care Act. As the 1937-1938 recession deepened, many erstwhile supporters began examining the details of Works Progress Administration programs such as the Federal Theatre Project that existed with minimal oversight from Congress.

The narrative of One-Third of a Nation is striking in its specificity: it is a play premiered in New York City, about the implementation of a recent federal law in New York City, and recommending specific legislative changes to promote revised local and federal public housing policies. The play was the most widely presented work in the Federal Theatre Project’s history – free performances were staged in ten major U.S. cities, with the play being seen by more than 217,000 people in New York City alone.

To some theatre audiences today, One-Third of a Nation seems an incredibly timely piece of socially conscious performance art. The play responds directly to the United States Housing Act of 1937, also known as the Wagner-Steagall Act, which required that public housing construction be matched by slum clearance. Slum clearance has become highly controversial in recent decades for its potentially discriminatory aspects; One-Third of a Nation places it front and center by showing a tenement burning onstage.

To others, however, One-Third of a Nation was extremely problematic. To some, it evoked the domestic propaganda and rallies of fascist Italy and Nazi Germany – both of which used government-funded art to cement their agendas and keep their strongmen in power. The use of fire on stage was particularly provocative and recalled to some the imagery of Nazi book burnings, torchlight rallies, and (later) Kristallnacht.

Then there was the play’s financial backdrop: it was funded for the federal government as part of the Works Progress Administration (WPA), an entity controlled by the Secretary of the Interior – who, of course, answered to the President – with little budget oversight by Congress. It also employed a very unusually high number of actors – the original used 25, a number whose excess was highlighted by being cut to 11 in some productions. This also recalled to some a tactic of fascist governments in Europe, in which businesses were forced to hire party supporters (a corresponding example can be seen in It Can’t Happen Here – another Federal Theatre Project play).

The ultimate result of One-Third of a Nation was that members of Congress voted to end the Federal Theatre Project (1935-1939), causing its shuttering in June 1939. Depending on one’s perspective, the play either represents the best of the Federal Theatre Project or its worst – or a subjectively viewed tale of the U.S. government’s uneasy relationship with federal arts funding.