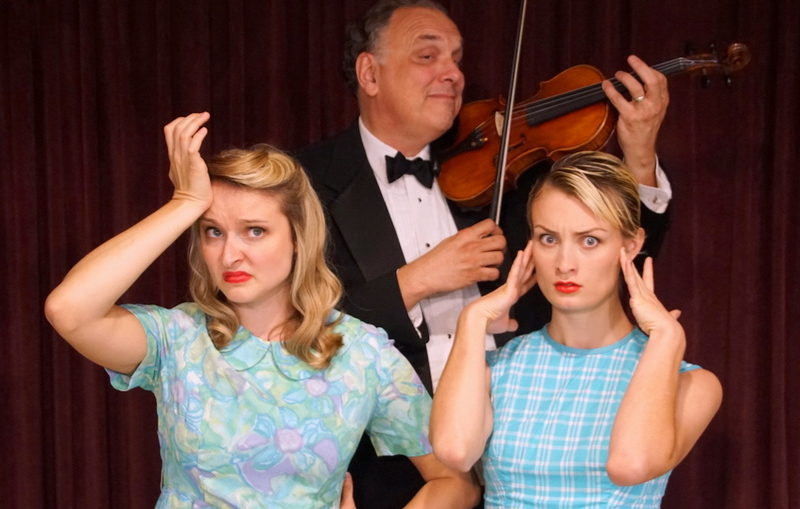 Orpheus (Jim Ahrens) with his alternating Euridices (Jennifer LeDoux and Nelle June Anderson) in the Gilbert and Sullivan Very Light Opera Company’s current production of Orpheus in the Underworld.

The Gilbert and Sullivan Very Light Opera Company is back this fall with Orpheus in the Underworld, an English-language translation of the Jacques Offenbach operetta that made can-can dancing a pop culture phenomenon. If you’re looking for deep story, this is not the show for you; this is an evening (or afternoon) of some pretty and light music with humorous situational comedy.

This is not the normal Greek myth of Orpheus and Eurydice, the story of the world’s greatest musician venturing into hell to try and save his just-deceased bride. Instead, this parody presents Orpheus and Eurydice as an unhappily married couple, with Orpheus going reluctantly in search of his bride under literally divine duress. The English adaptation used was developed for the English National Opera in 1984, and has a very British sense of humor to it.

Director Lesley Hendrickson has set the opening act firmly in Western suburbia, with costumes mostly evoking the 1950s. At the reviewed performance, Nelle June Anderson played Eurydice and Joe Allen covered the role of Pluto. Anderson’s Eurydice is courted by Wally Benbenek’s Jupiter and Allen’s Pluto, while generally trying to evade her husband Orpheus (Jim Ahrens). Anderson sings with a lovely and nimble soprano voice, diving into the comic absurdity of the plot. One of the show’s highlight is the famous Fly duet, played to great humor by Benbenek and Anderson.

This production is at its best when it embraces the delicious absurdities of the plot, as in songs like “He Is Coming, Oh, How Boring” and John Styx (Thore Dosdall)’s comic attempts to hit on Eurydice in “Though I Was The King Of All Boeotia”. Other highlights include scene-stealing appearances by Cupid (Maggie Burr) and the Love Police (Sarah Mehle, Cassandra Utt, and Anna Maher), the gods’ enthusiastic embrace of hellish food, and (of course) the infamous can-can.