A photo collage of the recipients of the Arts Reader‘s awards for the 2018 Minnesota Fringe Festival.

On Sunday night, the Minnesota Fringe will announce its official awards for its 2018 festivals at its closing-night party at Can Can Wonderland. Awards for the Minnesota Fringe have come and gone with different winds of leadership, with its own metrics and voting processes. The Arts Reader has its own system, which selects and spotlights shows that we think deserve special honors.

What puts a show on this list? In a word, impact. It’s a quality that’s hard to define, but very recognizable when you feel it. Some shows end up on our short list because of the sheer quality of the performance. Others end up there because of the originality of the story or the craft of their script and/or score. Others seem incredibly timely and resonant. Most have more than one of these aspects.

The process begins with peering through the show descriptions and press pitches (yes, we read every one). Next, we watch the previews and video trailers and other materials. Then we deploy a team of writers with significant experience in theatre to go see shows and report back. Some are theatremakers; others are aficionados or critics. We maintain a running conversation during the process; if someone wants to nominate a show for the short list, then we try and make certain that other members of the team see it. (This is no easy task with some sell-outs as buzz builds.)

Ultimately, it comes down to writers in a room (virtual, office, bar, etc.) talking about things that they’ve seen and think are deserving of special consideration. Many excellent shows are considered but don’t make it onto the final three lists. With no further ado, these are the recipients of the Twin Cities Arts Reader‘s 2018 Fringe Awards:

In previous years, we waited until after the final performances to announce our awards – in part because the encore performances allowed us to see one last set of shows before voting. This year, however, the encore slot has been eliminated, removing a major incentive for waiting to catch hard-to-see shows. We have therefore timed this year’s awards announcement to predate the Minnesota Fringe’s own official awards, so as to avoid the potential for confirmation bias. We’ll check back about these shows’ box office results in a later installment. 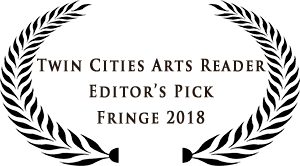 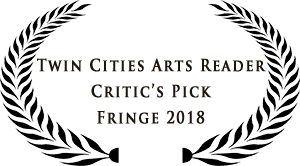 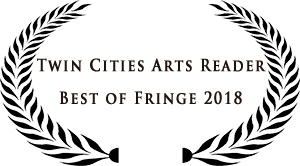 Not Fair, My Lady!, presented by Colleen Somerville Productions

Eddie Poe, presented by The Coldharts

A Justice League of Their Own, presented by Mainly Me Productions

Lions and Peacocks and Snakes – Oh My!, presented by CAAM Chinese Dance Theater