You are here
Home > Arts > REVIEW: The Many Returns of Jane Austen in <em>Christmas at Pemberley</em> (Jungle Theater) 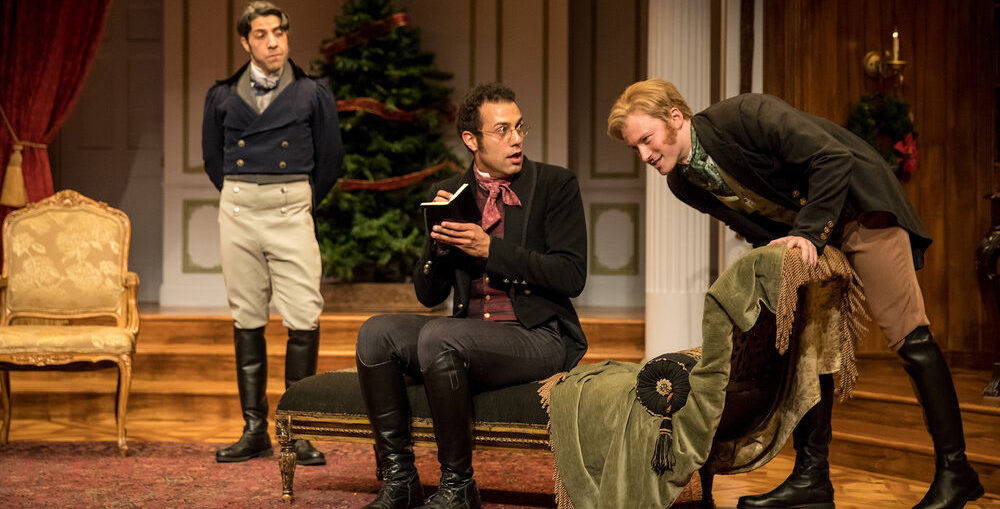 The Jungle Theater’s 2017 holiday hit Miss Bennet: Christmas at Pemberley is back. Name not ring a bell? What about Death Comes to Pemberley? No? Okay, well, you remember Pride and Prejudice, right?

In case you need further prompting, Pemberley is the family estate of the handsome, extremely wealthy, and more than a bit haughty (and hottie) Mr. Darcy in Jane Austen’s seminal novel Pride and Prejudice. Lauren Gunderson and Margot Melcon’s continuation play Christmas at Pemberley picks up the story after two Bennet sisters have married into the Darcy and Bingley families, with the family brought back together for the Christmas holiday. Naturally, the road to Christmas does not run smoothly, thanks to some old sibling rivalries and romantic wrenches tossed in to complicate the plot.

One of the virtues of Gunderson and Melcon’s script on the repeat is that it both feels very familiar and gives a new look at these old friends from the screen and page. It also, in case you’re wondering, brilliantly plants the seeds for story threads that come to the forefront in the play’s own sequel The Wickhams (which, itself, will hopefully be returning next year).

While Christina Baldwin returns as the director, there have been a few shuffles in the cast since 2017. If you’re considering seeing this show again, however, an item of greater interest is that this show has a very different vibe in its new incarnation. To begin with, the play unfolds much faster, and to farcical effect. If the 2017 production was a serious play with a lot of very funny moments, the present one is a no-punches pulled, flat-out comedy. It’s a strength of the material that it does well in both guises, and Saturday’s audience responded warmly by regularly convulsing the theatre with laughter.

Another change in shading in this incarnation are the more visible threads of sisterhood. These diffuse a few tense moments and enhance the poignancy of several scenes, particularly Mary (Christian Bardin)’s monologue on the invisibility of middle sisterhood. Bardin’s passionate delivery brought the audience to a hush broken only by murmurs of sympathy and a few sobs from the audience. It’s a powerful moment combining Baldwin’s careful directing and Bardin’s poignant performance – as before, one of the show’s highlights.

One of the questions that you might ask, perhaps, is “Will I enjoy this show if I haven’t experienced Pride and Prejudice?” You could, perhaps, wander across the river to St. Paul to see Pride and Prejudice onstage, which by happenstance is also playing on Park Square Theatre’s stage. However, judging by some intermission comments from theatregoers, that step is actually unnecessary, as the vividly painted characters suck you quickly into this world. You might want to read the book or go binge-watching the mini-series for other reasons involving your significant other, however. Either way, it’s a pretty solid date night pick.

Miss Bennet: Christmas at Pemberley runs through December 29 at the Jungle Theater in Minneapolis, MN.