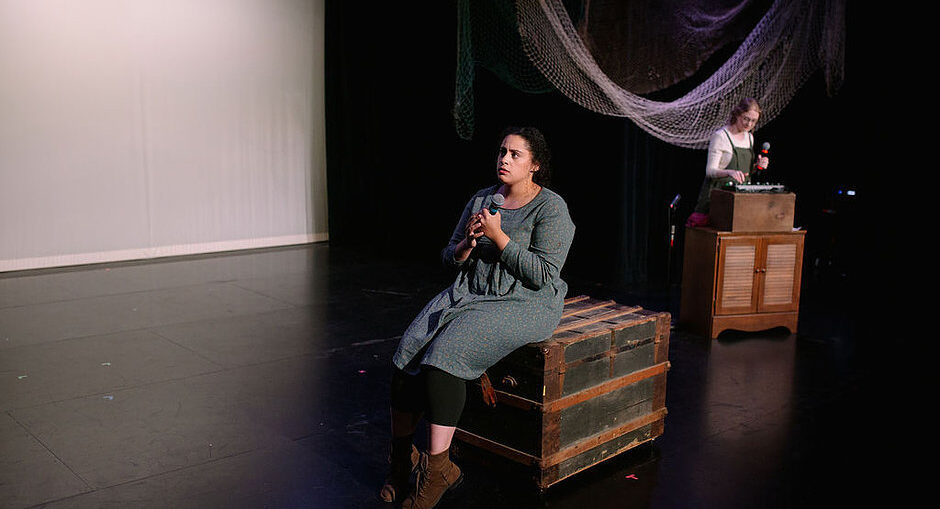 Deidre Cochran and Christine Wade in Theatre Elision’s production of Islander by Amy Draper, Finn Anderson, and Stewart Melton, playing through July 31 at the Elision Playhouse in Crystal, MN. Photo by Jessica Holleque.

If you’re hesitant about returning to live theatre attendance, Theatre Elision is rolling out the red carpet treatment to entice you back. There is ample free parking at their suburban location in Crystal, MN. There are comfortable theatre seats, a newly installed and upgraded HVAC system, and an Actors’ Equity Association-approved COVID-19 safety plan in place. The audience on Saturday was even 100% masked.

Then there’s the show itself and its performers: two multitalented actors, an innovative score using looping effects to build up a complex and engaging tapestry of sound, and an engaging narrative that will have you harkening to travel to the Outer Hebrides of Scotland. All told, Islander is a lovely gem of an experience, unfolding in a compact 70 minutes of theatre.

More than a glimpse of Islander‘s plot would be spoiling; suffice it to say that it hooks into themes like whales, the culture of outlying islands and shrinking populations, age, forgiveness, and identity. If you grew up in small-town Minnesota, some of the these will grab you right away. If you’ve ever yearned to travel the windswept seas or live on a distant, non-tropical island, you might leave with renewed wanderlust. The staging by director and scenic designer Lindsay Fitzgerald is simple in execution, but establishing and evocative.

Although the dramatis personae for this tale is not insubstantial, they are all brought to life by just two actors: Christine Wade and Emily Dussault (alternating with Deidre Cochran for select performances). This is not a limiting factor: a mixture of body language and coloring accent swaps quickly make clear who is who in a given scene. Peter Gustafson’s lighting designs and a series of video projections complete the sense of space.

The score of Islander is hard to describe, in part because most of the songs are so unlike traditional musical theatre. A cappella airs and duets are there – many strongly evocative of Scottish folk music – but so, too, are elaborate musical constructions that Wade and Dussault build up in real-time, using only their voices and audio looping pedals. The variety is impressive, especially since you can watch each texture being built and modified in real time by the performers.

Seventy minutes is not a lot of time, but Islander feels like a substantial arc. You leave the theatre feeling refreshed, energized, and like something meaningful has happened. That’s not a bad way to return to live theatre.

—
Islander plays through July 31 at the Elision Playhouse in Crystal, MN.