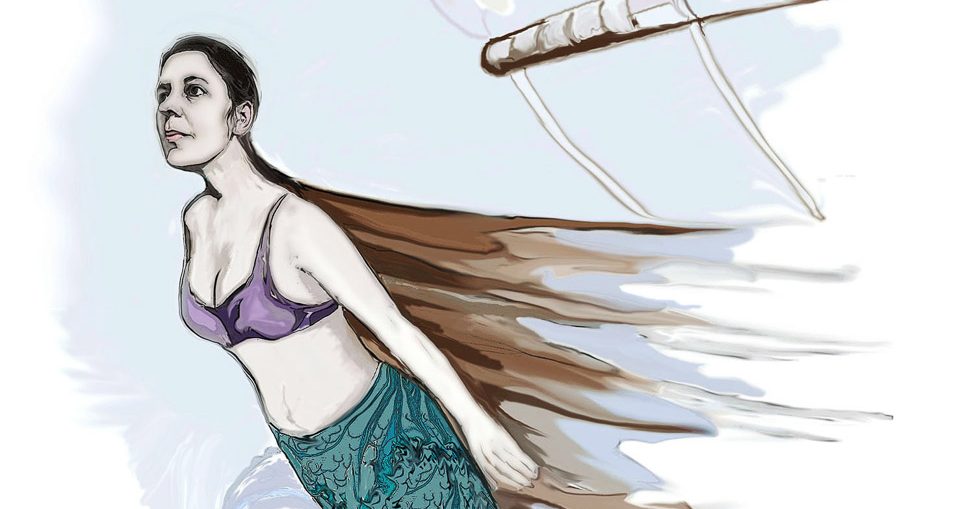 A promotional image for A Mermaid Abroad & A Fish Out of Water.

First came Died in a Trailer Park/Woke Up a Mermaid. Then A Mermaid in Narnia (on LSD). Now “Mermaid Beauty is the New Aboveground Punk” and mermaid Ariel Leaf is back for the 2017 Minnesota Fringe Festival.

This time around, Leaf teams up with fish-out-of-water Scot Moore to deliver a pair of globe-trotting travelogues. The Arts Reader‘s Basil Considine spoke with Leaf about her show A Mermaid Abroad & A Fish Out of Water.

How did this show come to be?

I just realized that Scott and I both had had a lot of Adventures abroad and that we’re both storytellersm so I invited him to tell some with me.

Drug use was a featured element in A Mermaid in Narnia (on LSD) – is this more of the same? A new chapter?

There is drug use – but it’s not me this time.

This is a new chapter. I feel that I’ve done two similar shows, so I wanted to focus on a different part of my life, and this is a 2-person show this time. Half the writing is by fellow Fringe veteran and Freshwater Theatre Company member Scot Moore. Sometimes, we tell a story together; sometimes, we take turns.

A thing I really love about this show – that feels like an evolution for me – was learning how to collaborate with another storyteller.

Does this show condense multiple years’ adventures, or a more concise period of time?

Multiple years, between the two of us. Including when I lived abroad in Yugoslavia when I was 6.

How many countries’ adventures will be featured?

Were these all separate travels, or some of them together?

Three of mine are from the same trip in India, the rest are all separate.

The first story is a wonderful blending of Scot in Abu Dhabi and me in India, both writing about heartbreak. None of them are us traveling together.

Turns out India gives you some of the best material. Our trip went from Mumbai to Varanasi and up into Nepal. One story focuses specifically on going from Varanasi to Kathmandu.

Your show description mentions circumcision – how does that enter into things?

You sure you want the spoiler? That’s a pretty big spoiler.

I can say without giving too much away that it has to do with an affair I had in India.

What was the process like in turning your separate stories into an interwoven show?

It started as a solo show. But then I thought of a place in the show where it would be really funny to bring another person in so that I could step out – a joke on the story that came before it. Then one of my stories made him think of something that happened to him. Then, finally, I just decided if it was going to be one-third/two-thirds [him/me], I’d rather just go half-and-half and make it a true collaboration.

After that, we had a lot more back-and-forth discussion about what was going to go into the show and why, instead of [the original plan of] me and my director making the choices and him just coming along for the ride. I think the show is much better because of it.

I think my favorite part of the show is the place where we’re telling two separate stories, but interweaving our dialogue. I think each story is richer and more meaningful because of the echo of the other story.

Whose adventure is in Winnipeg?

Scot’s – alhough with my history, you’d expect it to be otherwise…

What brought you to Slovenia?

My mother wanted to go to an art school there, oddly enough.

Does your daughter Fiona attend when you perform?

Not yet. A year-and-a-half old is a little young to sit through a show, I think – but she was on the Fringe postcard for The Abortion Chronicles last year – that’s her hand on my mouth. She’s also been in a 48-hour film. And another film as well, so two.

Watch the Fringe preview for A Mermaid Abroad & A Fish Out of Water:

—
A Mermaid Abroad & A Fish Out of Water opens Saturday, August 5 at 7 PM, and plays through August 12 in the University of Minnesota’s Rarig Center Xperimental stage.