Back in the days of Theatre de la Jeune Lune, reviewers trying to describe the company’s shows often used the term mise-en-scène. A literal translation of this term is deceptively simple: “placing on stage.” In practice, the term refers to the importance of how everything fits together as a whole – how a world is put together, a story told, etc. It’s more than that, but those details and that explanation are much harder to pin down.

Breaking down what makes The Moving Company’s Liberty Falls, 54321 so funny is similarly hard to pin down. Why is repeating a phrase or a gesture, a character’s visual tic, or singing opera excerpts in frankly bizarre circumstances so funny? What is it about Steven Epp’s turn as a racist old grandmother that makes it side-splitting but just short of distractingly offensive? This is why theatre fans and theatre critics often follow mise-en-scène with that other omnibus, je ne sais quoi (“I don’t know what”). 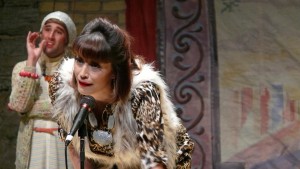 Epp is joined in Liberty Falls by sisters Christina Baldwin and Jennifer Baldwin Peden, Heidi Bakke, Nathan Keepers (another great drag role), and Dom Wooten. There’s not a slow moment, and good luck predicting what will happen next in the show – the twists and turns are fun to follow and even better watch. If you’re an opera fan, you’ve probably never seen the Lakmé flower duet quite like this, and Wooten’s syrupy tenor will make you want to find whatever he’s doing next – if not just come back again to see what you missed in the previous show.

So how best to describe this show that Dominique Serrand directed? If you insist, think of what a show created by a Marx Brothers–Laurel and Hardy teamup might have looked like. That’ll get you half-way, then you’ll be spouting French again. Or just going back to revisit the show.

Liberty Falls, 54321 plays through Sunday, December 20 at The Lab Theatre.