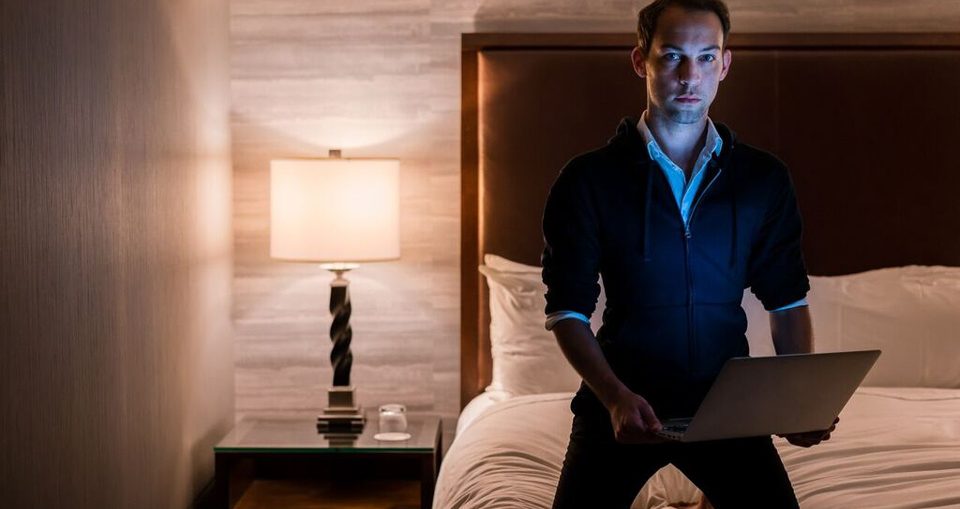 Our popular Fringe File series on the Minnesota Fringe Festival returns for its first 2017 installment. Pictured: Grant Sorenson in New Epic Theater’s Now or Later, an Ivey Award-winning production at the 2016 MN Fringe.

Are you a dancer? Comedian? Actor? Writer? A one-woman band with a crazy magic show and a bunch of talking puppets? Are you thinking about putting on a show and would rather not deal with that whole hassle of finding a space and hiring a box office staff? If any of these appeal to you, or if you just like the idea of performing in a festival with 50,000 attendees, you might want to consider applying to the 2017 Minnesota Fringe Fringe Festival.

All fringe festivals are connected in spirit to the Edinburgh Festival Fringe, a 70-year-old annual event in Scotland that has grown to become the world’s largest arts festival. The “fringe” label comes out of the Edinburgh International Festival, which was launched in 1947 to try and jumpstart the performing arts in war-torn Europe. Jumpstart it did: EIF’s inaugural run drew huge crowds and boasted top ensembles from across Europe, including the Vienna Philharmonic. (The Philharmonic poignantly performed under the baton of conductor Bruno Walter, who had been forced to flee its podium 9 years earlier due to the Anschluss.) Somewhat unexpectedly, 8 additional, uninvited theatre companies arrived to stage their o 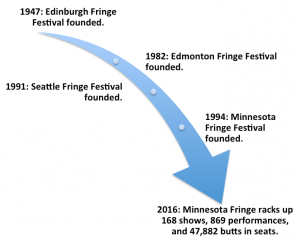 wn performances; this experiment, operating outside of the main festival and repeated every year since, eventually become known as the Edinburgh Festival Fringe.

“Round the fringe of official Festival drama, there seems to be more private enterprise than before…I am afraid some of us are not going to be at home during the evenings!” — Robert Kemp, “More that is Fresh in Drama,” Edinburgh Evening News, 14 August 1948

At first, American troupes had to cross the Atlantic to perform at Edinburgh Fringe. By the 1960s, a similar spirit of experimentation drove the development of what is now called Off-Off Broadway theatre in New York City, but the first generation of fringe festivals was limited to Europe. The first North American fringe festival wasn’t established until 1982, when the Edmonton International Fringe Festival opened its doors in Alberta, Canada. The movement reached the United States in 1991 with the foundation of the Seattle Fringe Festival.

What is MN Fringe?

The Minnesota Fringe Festival was founded in 1994 by Bob McFadden, a Carleton College (’66) and playwright who had fallen in love with the Winnipeg Fringe Festival two years earlier (Winnipeg Fringe itself was only founded in 1988). McFadden, recalling his own frustrations getting plays produced by traditional theatres, was especially drawn to the Fringe tradition of unjuried submissions.

Some Fringe festivals are partially curated, but the Minnesota Fringe Festival is wholly unjuried and works on a lottery system. (One alternate scheme, used by San Diego International Fringe, has some slots available on a first-come, first-served basis, while the rest are assigned by lottery.) In these circumstances, a key point in festival growth is when the demand for production slots outstrips the supply of venues. MN Fringe hit this point in 2005, when it reached a capacity of 120 shows and had to begin turning away applicants who were not successful in the lottery.

Although the number of MN Fringe shows has inched up over the years as additional venues have become, a significant portion of this growth has been driven by the addition of site-specific shows. A traditional application for MN Fringe requests a small (≤85 seat) or regular (>85 seat) performing venue; site-specific shows make their own space reservations, and have staged performances in locales as compact as an apartment bathtub to as expansive as a walking tour, with just about anything in-between. Site-specific, one might say, is the original Fringe model from Edinburgh – today, most groups interested in performing there have to rent coffee shops, bars, living rooms, and even street corners years in results. Although the Twin Cities’site-specific landscape isn’t quite that competitive, the number of site-specific performances has varied considerably, from 23 in 2006 to just 5 slots assigned in the 2017 lottery.

The inaugural Minnesota Fringe Festival was a modest-sized affair: 53 shows attracting 4,600 theatergoers. Today’s Minnesota Fringe Festival is much larger in every respect; in 2016, 168 shows attracted 47,864 butts in seats. The $6 single-show tickets used in 1994, joined by collectible buttons, gave way last year to $22 wristbands good for unlimited same-day admissions (the buttons are still available for sale).

So You Want to Stage a Show…

Although production costs for an MN Fringe show are ultimately the responsibility of the Fringe artists, there are certain fixed costs associated with applying and being accepted into the festival:

According to the MN Fringe website, the 2017 Fringe Festival will includes 4 small and 11 regular venues, for a total of 165 non-site-specific production slots. The deadline to submit all applications for the 2017 Minnesota Fringe Festival is Friday, February 17, 2017, at 5 pm Central Time. Lottery Day is February 27, 2017, with drawings commencing at 7 pm (location TBA).

An earlier version of this article used “Site-specific/Bring-Your-Own Venue” to refer to MN Fringe applications in which the applicants reserve their own spaces. This wording has been changed to “Site-specific” only by MN Fringe request, so as to avoid potential confusion. The common term used for similar applications at other festivals is “BYOV”.