The W.A.L.K.E.R. giant robot prepares to deal a finishing blow to the monster that menaced Minneapolis this morning.

The Minneapolis Monster Menace has come to an end. In a stunning development, the Walker Art Center transformed into a giant robot and defeated the monster menacing Uptown in a climactic battle on the Chain of Lakes. The Battle of Minneapolis saved the Uptown restaurant scene from destruction in one of the most shocking events in the contemporary American arts world.

“I’m sure you have many questions,” said the W.A.L.K.E.R. Art Center’s Commander Karen Gysin, Associate Director of Public Relations and the radio operator for the giant robot. “But the most important thing now is that things can go back to normal. Nothing to see here.”

As crews began filling in the hole left by the giant, insect-like creature, which Twin Cities residents are calling The Lutefisk on social media, W.A.L.K.E.R. contractors were already repairing the glass, brick, and steel gallery facade that covers the giant robot when it’s not in use.

The Winter and Lake Kickass Emergency Robot (W.A.L.K.E.R.) was first conceived by lumber baron and philanthropist T.B. Walker in 1879. The original plans for W.A.L.K.E.R utilized mammoth steam engines and hydraulically controlled limbs made from old-growth Minnesota lumber; after a prototype engine caught fire, triggering the Great Minneapolis Fire of 1893 and destroying much of the city, Walker realized that the construction would need to be continued underground for safety and security reasons. After the city was rebuilt, and under the cover of World War 1, Walker purchased much of Lowry Hill in 1916 to begin construction of a secret underground factory bunker.

In order to disguise these plans from German spies, Walker announced that he would transfer his extensive private art collection – already viewable by the public in his home – to a new museum. Constructing the extensive underground vaults and caverns to build the W.A.L.K.E.R. in secret delayed the opening of the Walker Art Galleries for 11 years. T.B. Walker passed away in 1928, but his vision was continued by a top secret parastatal organization that evolved into the present-day W.A.L.K.E.R. Art Center.

Despite many prototypes, achieving T.B. Walker’s vision of a giant robot defending Minneapolis “against all threats, Soviet and otherwise” was challenged by the massive power requirements. A solution was found in 1971, when federal funding to build a nuclear reactor was made available under Operation Plowshare, a program to find peaceful uses for nuclear technology. The Walker’s current main building, designed by Edward Larrabee Barnes and opened in May 1971, was added to mask the reactor’s cooling tower behind a brick facade.

“It’s important to recognize that we never set out to build a world-class contemporary art museum,” said Dean Otto, a former film curator at the W.A.L.K.E.R. and the designer of the giant robot’s video displays. “All of the Works Progress Administration programming and the Federal Art Project was so that we would have a plausible cover story for all the people going in and out of the museum, and for all of the money that we were spending on robotics research. The problem was that people actually liked what we were doing, and kept coming in greater and greater numbers.”

This problematic success with the public led successive directors and curators to concentrate on contemporary art in an effort to drive away the public. According to an unpublished diary by Martin Friedman, the Walker’s director from 1961 to 1990, staff were befuddled at why the public kept coming to see “toilets, photographs of soup cans, and other household objects.” Local dancers, poets, and musicians began presenting at the museum in 1940, despite the lack of compensation offered, and brought increasing numbers of audience members and performers who continually threatened to wander into Top Secret areas in their hunt for the backstage areas. This problem reached a peak in 1963, when Friedman pushed the reluctant Walker staff to curate contemporary opera performances.

“Nothing else could do so much to drive people away,” Friedman wrote in 1963, “As hours of singing with an utter lack of tonality, sense of rhythm, or distinct boundaries between dialogue and song.” Audiences apparently disagreed: in a 1970 entry, Friedman noted, “I don’t understand why this isn’t working! Now we have to spin off this opera company just to create restroom space for all of our contractors.”

T.B. Walker’s vision finally came to its full fruition in 2005, when the W.A.L.K.E.R’s head was installed. Due to a reactor redesign following the 1986 Chernobyl nuclear disaster, the final robot design was too tall for the Center’s underground caverns; Herzog & de Meuron’s solution was to hide it in plain sight – in full view of tens of thousands of daily commuters who came, by and large, to accept its presence as just another contemporary art quirk.

Although not all viewers were fooled, W.A.L.K.E.R. staff successfully defused the situation with an Internet-based misdirection campaign making light of claims that they had deposited a giant robot head on Hennepin Ave – which, of course, they actually had.

Despite the completion of the W.A.L.K.E.R, high visitor attendance has continued to plague the Art Center to which it is normally attached. In 2012, the Center sought to comprehensively address this by thoroughly discrediting itself in the art world with the first ever Internet Cat Video Festival. Katie Hill, the program associate and Electronic Systems Engineer for the W.A.L.K.E.R. who conceived the festival, said that they expected it to draw only a few dozen people at most – the sort of thing that they could use as a cover story for cancelling a few exhibitions and clear out the galleries for important systems testing.

Despite drawing on publicly available videos from YouTube and having no critical art basis worth mentioning, the inaugural festival drew 10,000 people – so many that the Center staff felt compelled to offer it again…three times. Soon, the festival drew international coverage and swelling crowds, forcing the Center to take it to the Minnesota State Fairgrounds and the Saints’ stadium, before finally donating all related materials to the Minnesota Historical Society in an attempt to divest itself of the unwanted public attention.

This need to satisfy the public took its toll on the Center staff, who were forced to lead double careers. Fionn Meade, who was hired to lead the W.A.L.K.E.R. bridge team behind the scenes in 2015, left in 2017 due to what were officially called personal reasons. Off the record, staff recalled Meade’s complaints about the “problem of the public,” quoting him as saying, “I was hired to pilot a giant robot. A giant robot! Why are all these civilians in our facility all the time?”

There are still many unanswered questions about the monster whose egg was discovered by MnDOT construction crews late last night. Curiously, the location from which it emerged was precisely at an intersection in the Sculpture Garden, suggesting that W.A.L.K.E.R. staff may have had some hint of its existence. 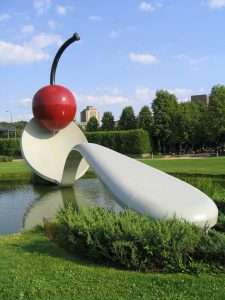 Besides the revelation that Minnesota’s leading contemporary art museum is a cover for a giant robot designed to protect the Twin Cities from a Soviet invasion and giant monsters, Minnesotans now have to rethink their relationship to some of the city’s most defining public art. The iconic Cherry and Spoon sculpture – officially “Spoonbridge and Cherry” – has now been revealed to be the W.A.L.K.E.R. robot’s handheld weapon. Designed by the husband-and-wife team of artist and weapons designers Claes Oldenburg and Coosje van Bruggen, the Cherry and Spoon weighs 3.5 tons; the placement of the cherry at the end of the spoon functions like the head of a mace, concentrating mass into monster-crunching blows. Like the robot head, its placement above ground was due to a lack of space in the Center’s underground facilities.

The W.A.L.K.E.R. bridge team was caught off guard by the emergence of the monster now popularly known as The Lutefisk this morning. With access to the Center complicated by the I-94 construction and the trail of devastation left by the monster as it rampaged through an Uptown breakfast buffet, activating the W.A.L.K.E.R. fell to former Walker PR Intern and Sales/Weapons Associate Anna Collins, who rushed to the Center and took command. “I was actually headed to brunch at Uptown Diner,” said Collins. “But when I saw the monster stomp my friend’s car flat, I knew there was just one thing to do.”

After ripping itself from the museum facade and lifting its body from the underground caverns, W.A.L.K.E.R. seized the Cherry and Spoon and confronted The Lutefisk in the waters of Lake Calhoun. The resulting battle churned the waters and raged all the way up to the northern tip of Lake of the Isles and into the streets of the East Isles neighborhood. “Sebastian Joe’s missed getting trampled by this much,” said Jordan Carter, a Curatorial Fellow/Armorer who worked damage control during the fight. “I gave Captain Collins full emergency power at that point, and we pushed it out of the streets and back into the Chain of Lakes.”

As the battle moved south again, a newly re-installed Nice Ride bicycle station became a casualty of the battle, although Commander Karen Gysin denied that the W.A.L.K.E.R. had done the stomping. Finally, the giant robot seized The Lutefisk by the neck and finished it with a blow to the head with the Cherry and Spoon.

The crew of the W.A.L.K.E.R. are reported to have celebrated with steak and eggs, Harvey Wallbanger cocktails, and mocha coffees at Burch Restaurant in Lowry Hill following their victory.