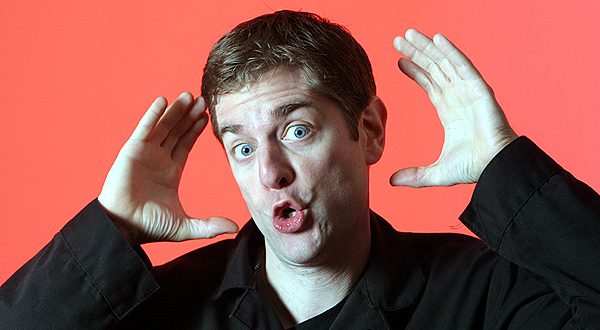 Charles Ross is the creator and star of One Man Star Wars Trilogy.

With One Man Star Wars Trilogy, the title is more or less what you get. This solo show by Charles Ross is an extended set of in-jokes and references spanning the original Star Wars trilogy. It’s nostalgic, at times very funny, and generally amusing. It’s also targeted to a specific base: people who have seen the original films many, many times.

In the Age of the Internet, this isn’t a bad bet: it’s never been easier to watch your favorite Star Wars moments over and over again. The show plays off the oft-intimate familiarity that fans develop with their cult favorites, and passes quickly.

It is both a strength and a weakness that OMSWT is extremely ephemeral: on the one hand, it celebrates briefly passing moments like an iconic visual shot; on the other, afterwards you’d be hard-pressed to recall many of the moments. It’s a low calorie affair, an afternoon diversion – something that won’t throw off your evening, but which pairs nicely with a dinner on the town or an evening stroll.

With the Minnesota Fringe Festival schedule set to launch on July 1, it’s of some relevance to point out that OMSWT began its life at MN Fringe some 19 years ago. It’s been playing ever since, which says something about the franchise’s enduring appeal and social saturation – but you knew that before you read it. The show sizes up nicely to the Ordway’s Concert Hall, with perhaps some extra sliding around the stage.

Engagingly rendered, barely slowing ’til the end. Not for Star Wars novices.