You are here
Home > Arts > FEATURE: The Venezuelan Crisis and Music – A Tale of El Sistema, Bolivarists, and Sphinx 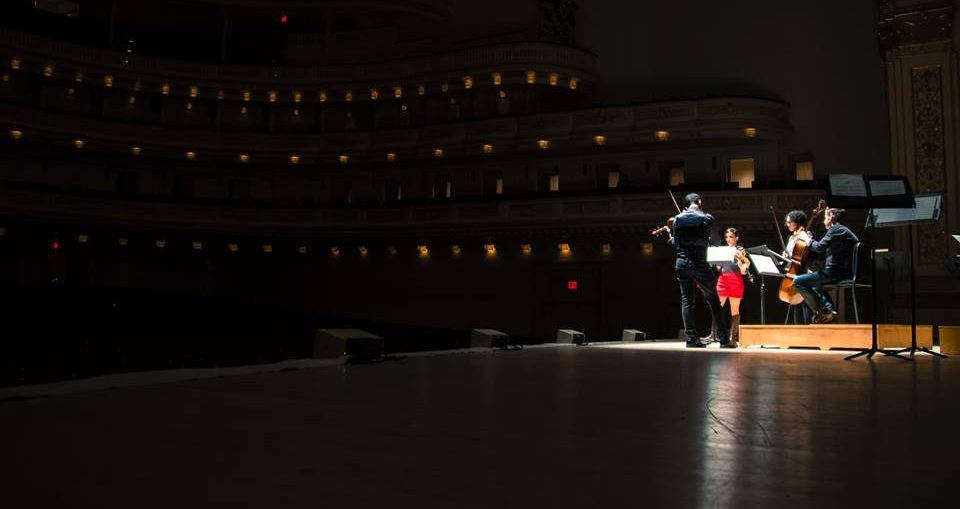 It was the first of August. Dr. Deborah Justice was settling in for a month of fiddling around – musically speaking – when the email arrived. “I’m afraid I have some sad news from Caracas,” it began. “Venezuela at this moment is now a war zone.”

At that moment in the United States, Dr. Justice was sitting in the West Virginia countryside, all set to play at the Appalachian String Band Music Festival (Clifftop for short). She’d packed her banjo and guitar for the occasion, but she was far more than just a performer. A professional ethnomusicologist and administrator, Dr. Justice also manages Cornell University’s Cornell Concert Series. The email, which arrived right in the middle of summer vacation, was telling her that the Simón Bolívar String Quartet – the star act for her series’ opening concert – wasn’t going to be making it out of Venezuela.

The Simón Bolívar String Quartet is one of Venezuela’s leading chamber music groups. It’s also one of the great success stories of the country’s vaunted El Sistema community music program. Each of its members came up through the El Sistema network, rising to play in its flagship orchestra before also branching into the chamber ensemble.

Just a few years earlier, the quartet was touring internationally, racking up rave reviews and audience ovations in Europe and North America. Now, at home, law and order were breaking down on their doorstep. As rioting and violence spread across home city – and more than a few musicians ended up on the front lines of protests – just getting around Caracas was difficult enough. Then international airlines began cancelling their Venezuelan routes and the U.S. Embassy started evacuating families. A whole weekend of community programming in Ithaca, NY had been built around the quartet and El Sistema, and it looked like events more than two thousand miles away were going to wash it away entirely.

Not one to be stopped by such things, Dr. Justice leapt into action, virtual Rolodex in hand. Safety in Caracas may have been a nut too distant to crack, but saving the concert was another thing. Within hours, offers for replacement string quartets were pouring in.

Replacing star performers for a concert five weeks out is no easy business, however. After all, SBSQ is justly famous and audiences were eager to see them, with strong advance sales for the CCS concert. As Dr. Peter Diamessis (Chair of Cornell’s Faculty Committee on Music) stated, SBSQ’s members are “artists of the highest musical skill…they seem to bring a whole other spirit and diversity to their performances that is very animated and connected with their audience.”

These factors made it imperative that any replacement not only be available, but also provide similar music programming and star power. Ideally, they would be able to tie in with most of the El Sistema workshops, film screening, and other activities organized in cooperation with the concert series. Meeting all of these requirements was no easy task, but by August 7th – not quite a week after her picking was interrupted – Dr. Justice was back on vacation, with a worthy replacement booked: the Catalyst Quartet.

Just as the members of the Simón Bolívar String Quartet came out of the same program and orchestra, so, too, the Catalyst Quartet’s members share a common thread. Violinist Jessie Montgomery, violinist Karla Donehew Perez, violist Paul Laraia, and cellist Karlos Rodriguez came together through the Sphinx Competition in Detroit. The Sphinx Competition, and its parent the Sphinx Organization, holds many ideological parallels with El Sistema. Both follow a mandate to break down arts access barriers and inspire young audiences with ethnically diverse music programs.

Ultimately, the Sphinx Organization liked the quartet’s original foursome so much that it sponsored them, an arrangement that has continued even as what became the Catalyst Quartet (the name emphasizes their mission of catalyzing change) moved its base to New York and ranged across the world. For local audiences, the Catalyst Quartet lineup even looked familiar – they’d dazzled Ithaca in 2016 as members of the larger Sphinx Virtuosi ensemble (also sponsored by the Sphinx Organization).

When reviewing the Sphinx Quartet, the Washington Post’s Stephen Brookes remarked on their playing and emphasis on works by Latin American composers, noting, “Some of the most fiery and flavorful music of the past century has come out of Latin America… [they] made a good case for bringing more of it into the mainstream.” A similar Latin bent can be seen in their upcoming program, which begins with an arrangement of J.S. Bach’s Goldberg Variations. A pair of pieces by the Brazilian composer Heitor VillaLobos follow, then some music by the Argentinian tango-smith Astor Piazolla (familiar to recent operagoers as the composer of María de Buenos Aires), and finally a work by Argentina’s much-beloved Alberto Ginastera. The New York Times hailed their 2010 Carnegie Hall debut with a call for the concert organizers to feature the Catalyst Quartet more – which is exactly what the Cornell Concert Series audiences are getting next week.

What about that extra programming that Dr. Justice had lined up? There was one casualty, of the edible variety: a planned dinner ended up on the chopping block due to some scheduling shuffles. The main show and the rest of the events, however, will go on as planned.

Looking Down the Road

“Venezuela at this moment is now a war zone.”

As for the Simón Bolívar String Quartet, hopes are high on both sides that the quartet will eventually come to land in Ithaca. Protests and counter-protests continue to mount across the country, with more and more artistic and other collateral damage. Just ten days ago, the National Youth Orchestra of Venezuela’s U.S. tour was cancelled, arguably an expression of Venezuela’s deep economic crisis as much as the government’s displeasure at the criticisms voiced by conductor Gustavo Dudamel.

“We hope to reschedule these concert dates where possible.”

Still, some optimism remains on the south side of the Caribbean. In a statement, the quartet said, “We hope to reschedule these concert dates where possible, so that we can return soon… We very much hope to be able to perform internationally as a quartet again in the near future.”

Two thousand or so miles away, the optimism is mutual. The Ravinia Festival, one of SBSQ’s cancelled engagements, is keeping a light burning for the quartet and a place in its 2018 season. Dr. Diamessis echoed the sentiment, adding, “I also hope that the situation in Venezuela stabilizes in a healthy manner, both in terms of the domestic and international political struggles that are at play.”

The Catalyst String Quartet performs at 8 PM on Saturday, September 9 at Barnes Hall in Ithaca, NY. The quartet will also perform with the Saint Paul Chamber Orchestra Sept. 15-17 at the Ordway Center for the Performing Arts in St. Paul, MN.