Elvis Presley's been dead for almost 40 years ago, but with a little black magic and some really good casting, hair, and makeup, he's going to be hitting the stage at the Ordway. [Editor's note: Whether or not the black magic was performed by a woman has not been confirmed at press

The show postcard for Pound: A Musical for Dogs. Last night saw the second round of live previews for the 2016 Minnesota Fringe Festival. A total of 29 shows presented 3-minute excerpts, many of whose opening moments were carefully designed to discomfort and upstage Fringe Executive Director Jeff Larson during the introductions and seize 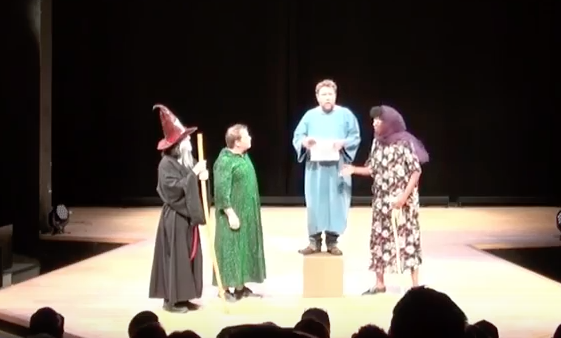 The cast of SmashHammer: The Musical. Last Monday, 29 shows appearing in the 2016 Minnesota Fringe Festival gave 3-minute previews at the University of Minnesota's Rarig Center's Stoll Thrust Stage. This was the first official look (at least as far as live performance is concerned) inside the festival overtaking Minneapolis stages in 2

The most interesting dinner party in the world in the Guthrie Theater's production of Disgraced. Photo by Dan Norman. Rodgers and Hammerstein's South Pacific was considered a stirring and thought-provoking exploration of race and prejudice when it opened. It was also a thrilling musical with a beautiful and witty score, which are the main reasons why it's mostly remembered

Angels and Demons Entertainment’s recent production of The Marriage of Figaro at the James J. Hill House in St. Paul was a magical experience. Over the last two weekends, the music of Mozart’s masterpiece has echoed through the rooms and over the terraces of the historic mansion, breathing new life

A scene from Under the Gaslight. Photo by Dan Norman. At the end of this summer, an era of Minnesota theatre comes to an end when the Minnesota Centennial Showboat closes its final season after 55 years on the waterfront. As things, began, so they end: the final production, Augustine Daly’s 1861 melodrama

Lady and the Trump is the latest comedy show from Brave New Workshop (BNW) and opened last week. BNW is well-known for its social and political humors based on certain themes. Like the Saturday Night Live television show, BNW is probably at its best when it weaves together comedy skits

Mukelisiwe Goba as Rafiki in The Lion King North American Tour. Photo by Matthew Murphy. The Lion King has touched down at the Orpheum Theatre for a five-week run. This show not only famously adapts the hit animated musical movie to the stage, but manages to raise the show to new artistic heights in the