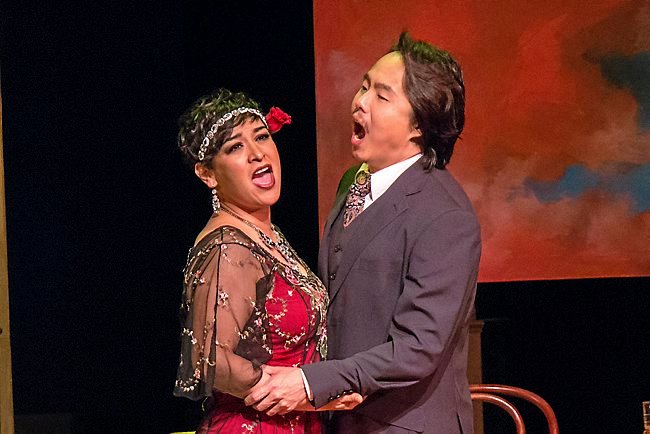 Last spring, Skylark Opera astonished Twin Cities opera fans with a sudden announcement that its 36th season was not to be. In a March 18 letter to subscribers, President Carrie Wesley wrote, “Skylark is at a crossroads…we hope that you will stand by our side during this time of discovery so we emerge reinvigorated.” Today, Skylark announced its vision for a reinvigorated and reimagined opera company. The company will return to Twin Cities stages in February 2017 with new leadership, a new name, and new branding.

For Skylark subscribers and singer-actors who’ve been eagerly awaiting this news, here are the parts you care about first: the newly renamed Skylark Opera Theatre will return in February with The Tragedy of Carmen and in June with a site-specific staging of Don Giovanni. It will also make a brief performance at the St. Paul Art Crawl on Oct. 12.

The first hints of Skylark’s new incarnation came on Monday, when the company’s Facebook page sprouted a stark image promising news in three days and bearing its new name, Skylark Opera Theatre. (The particularly adroit will recognize this specific name from Artistic Director Bob Neu’s website, which has steadfastly used the term ever since his appointment was announced last April.)

Rebranding is big news for an organization, but not at all unusual among Twin Cities-area opera companies – you might say it’s a rite of passage. Minnesota Opera, for example, began life as a new music program at the Walker Art Museum – it launched as Center Opera in 1963, became independent in 1969, and adopted its current name in 1971. My own company, Really Spicy Opera, operated for its first six years as the Reduced Spice Opera Company before a generous injection of peppers and curry overseas. Skylark began life in 1980 as Opera St. Paul – a name that was geographically accurate but also quite similar-sounding to the St. Paul Opera that had merged with MN Opera back in 1975. Opera St. Paul turned into North Star Opera in 1986, then reworked itself 20 years later as Skylark Opera – part of a $15,000 marketing campaign funded by the Bush Foundation.

What does the addition of the word Theatre to Skylark Opera’s name represent? Arguments over spelling aside, of the 238 North American opera companies listed on Wikipedia, only 39 (16.4%) brand themselves with “theater” or “theatre” in their name. This makes the nomenclature “Opera Theatre” distinctive, especially as a newer generation of opera companies take root in the Twin Cities. It also specifically evokes the dramatic aesthetic and broad repertoire pursued by companies like Opera Theatre of St. Louis, Chicago Opera Theater, and Michigan Opera Theatre.

Note: The University of Minnesota-Twin Cities’s opera program is named University Opera Theatre, but hasn’t managed to get its program listed on Wikipedia just yet.

Evolution of a Brand

A noted feature of this season is its conservative use of musical and theatrical resources – a hallmark of many groups operating under the label Opera Theatre – while throwing fresh light on old friends. Peter Brook’s The Tragedy of Carmen is a stripped-down, accelerated version of the Merimée/Bizet opera classic Carmen, with the familiar music interspersed with scenes from the source novel – and delivered in a thrilling 90 minutes, with no intermission. (As ribbed in his retirement roast and the remarks at this year’s Ivey Awards, this is an opera seemingly tailor-made to make Graydon Royce happy.) The choice of Sterling Hall at the Midpointe Event Center imparts a distinctly modern atmosphere, transporting the production outside of a traditional theatre environment. The entirety of The Tragedy of Carmen will be rendered onstage by just six singer-actors.

The site-specific production of Don Giovanni promises to attract great interest, coming on the heels of Bob Neu’s sold-out, site-specific summer production of The Marriage of Figaro at the James J. Hill House. Indeed, this staging at the Women’s Club in Minneapolis will be co-produced with Neu’s Angels & Demons Entertainment; the opera will be set in the United States in 1932, at the height of Prohibition.

When Skylark first announced that On the Twentieth Century was not to be, the company’s artistic direction was open on the heels of longtime Artistic Director Steven Stucki’s retirement. Stucki led the company for 27 years, during which the arts landscape of the Twin Cities changed drastically. Now, 16 years into the twentieth century, media consumption and entertainment habits are greatly altered for many Minnesotans. As part of the organization’s self-assessment, it initially left the Artistic Director position open. First, sometime Skylark director Bob Neu was brought on board as Interim Artistic Director; now, Neu has been appointed as the permanent Artistic Director. With Neu helming both of Skylark’s 2017 productions, the new vision seems clear: streamlined, up-close, personal, and impossible to miss. In a statement, Neu noted the importance of creating theatrical experiences that resonate with audiences. Skylark’s new programming seems tailored for just that.