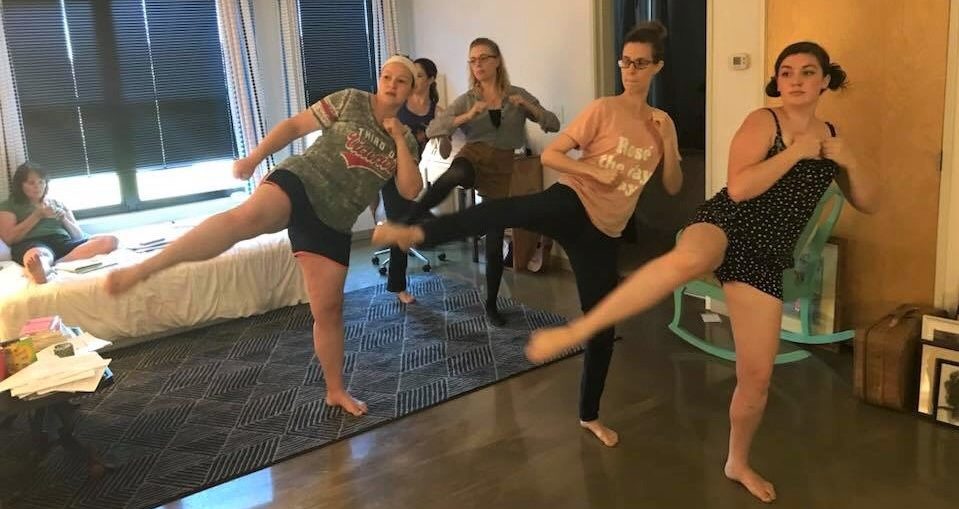 This installment of the Fringe File series looks at Josh Carson, the brainchild behind A Justice League of Their Own. This fringe show uses a classic film and a pop culture franchise as the platform for laughs and comedy.

This is a mashup of a famous movie with a pop culture comic franchise. How did you first encounter each?

The original movie was one of my favorites growing up. (The others being Back to the Future, Die Hard, Jurassic Park, and Adventures in Babysitting. I was quite well-rounded.) A League of Their Own is insanely quotable, legitimately makes baseball exciting to watch, and launches an endless dinner party debate about whether or not Geena Davis intentionally dropped the ball at the end of the movie so Lori Petty could win. (She did. She completely did. The movie foreshadows it in the first few minutes of the movie. Find me at Fringe, we’ll talk about it).

If I ever stumble across it on TV or Hulu or something, I’m drawn to it all over again. As for Justice League, I was a straight-up Marvel kid growing up, so I knew it was there, but it wasn’t always my favorite, aside from any Batman movie that came out. I’ve since become more familiar with the DC Universe, but I can honestly say I have no nostalgic affection for it. I just can’t resist a good pun (Which I couldn’t believe was still up for grabs).

What inspired you to write and stage A Justice League of Their Own?

The inspiration for this show is directly related. I’m an avid podcast listener and consumer of pop culture, so to pass the time at the day job, I’d always listen to podcasts about upcoming movies, previous movies, and what the last ending credits stinger meant for the next movie. It was around the time when the female reboot of Ghostbusters was announced, as well as every single pre-production element of the Wonder Woman movie. There’d ALWAYS be a section dedicated to the debate on whether or not these movies were a good idea, or if people would accept a female superhero movie.

Each time I heard the debate, I was reminded of the newsreel sequence in A League of Their Own that introduced the team. (Incidentally, the real newsreel segment the movie is spoofing is absurd and hilarious). I was particularly recalling Harry Shearer’s line “What a team! But girls!??!?! Playing baseball!?!?!?!” That was a joke in 1992, making fun of the mentality of the 1940s, yet here I was, listening to the newsreel of the present era saying the exact same thing. It didn’t take long to connect the title in my head, and thus, a new Fringe idea went down in my notebook.

Show Description
When the male superheroes are called away to fight an intergalactic war, the female superheroes rise up to protect their city by forming: A Justice League of Their Own. Who save the world?

This was a few years ago, and Wonder Woman was set to come out the following year. I didn’t get into Fringe that year, so the idea would live on to another year. However, with buzz about the Wonder Woman movie being so good and the other buzz about a possible female president, I oh-so-innocently thought I had missed the zeitgeist and we were moving on from this antiquated way of thinking. The zeitgeist, it seems, had other plans.

Leaving politics out of it, the Twitter reaction to the last Star Wars movie and a few other female driven reboots and franchises have meant that it’s still the newsreel out there for some.

Were you familiar with the similarly named fan posters for Justice League or the Hollywood Costumes promotion of the same name?

When I originally came up with the title, I googled it to cover my bases. At the time, Nerdist hadn’t yet launched the fan posters campaign you referred to. That came in 2017. When the opportunity arose to do the show this year, I googled again, and lo and behold…that popped up. “Oh no,” I thought, “I missed my window!” (Wouldn’t have been the first time that happened.) When I realized that it was a fan salute to the 25th anniversary to the movie, however, I realized there was a fanbase out there that had the same love for the movie that I did. (Those designs are awesome, by the by.)

When and how did you first take part in a Fringe show?

I was a senior at the U of M the summer of 2002 and I had just completed a playwriting workshop. The result of that workshop was a 1-act comedy called Video Guy, about the misadventures of the employees of a video rental store that may or may not rhyme with MockMuster Video. I had a finished script and no idea what to do next when my professor told me about the Minnesota Fringe Festival.

This was back in the pre-lottery days, so I just applied and all of a sudden I was a theater producer. It was a whirlwind summer worthy of a Fringe show itself, including the aforementioned MockMuster Video firing both myself and my lead actor – as well as threatening to sue us if we didn’t cease production on a show that reflected poorly on them.

The show went on, and when the dust settled…the show was a hit. It was the second top-selling show that year – trailing behind some young upstart named “Scrimshaw”…not sure whatever happened to him – and I was instantly hooked. I wasn’t even out of college yet, but I knew I kept wanting to do this.

That summer led to everything else: improv, sketch, self-producing. As I said during World Fringe Day, the Minnesota Fringe created me. You have it to thank/blame. Sixteen years and 13 Fringes later, I’m still here.

You’re performing in Theatre in the Round, which is arguably the best setting for the baseball diamond of A League of Their Own. Would this show have worked in its current form in a more traditional, proscenium-style venue?

Well, you never know what venue you’re going to get at the Fringe. However, we always like to take advantage of whatever space we get. Each Christmas, we turn the theater at Bryant Lake Bowl into a towering inferno for A Very Die Hard Christmas. We like to work with what we have rather than force it the other way around. That being said, Theatre in the Round has been a great space for us in the past, and we’re leaning our past experiences there to create another fun experience for the Fringe audiences.

You work on a wide variety of theatre-related projects with Mainly Me Productions – what keeps you coming back to the Minnesota Fringe Festival?

I love the Minnesota Fringe. That’s pretty much it.

The joke from the first year I ever did Fringe was that it was a bunch of artists trading $10 bills back and forth (which has since changed), but I never knew why that was a negative. I love stories about a scrappy group going all “Hey kids, let’s put on a show!” These were the passion projects. These meant something to the producers. Those stories were happening over 160 times in one ten day period. And you never know what you’re going to discover or who’s going to be the new Fringe all-star by summer’s end.

Just when I think I’ve met everyone in town, a new group comes along and absolutely crushes it, and you realize that everyone else is now competing for second place. It’s clichéd to say your cast becomes your second family, but clichés are clichés because they’re true. I have a creative family born out of the Fringe, many of whom ended up in my wedding. This family is ever-growing and loves each other as real as any family. Why wouldn’t you keep coming back to that?

How did you go about casting this show – approaching actors directly, auditions, or…?

Mainly Me Productions does a combination of recruitment and auditioning. Both official auditions and on-official.

I always joke that whenever I perform in the Fringe or another production in town, I always end up meeting a performer that I’d like work with, so the wish list just keeps growing and growing. I have an endless list of people I want to work with and cast, and, as any high school theater director will tell you, it always ends up being more women than men. I am fortunate enough to have both a roster of trusted funny ladies that I’m eager to work with every chance I can get, as well as new performers that I encounter through various other productions, some I’m involved in, some I’m not. Occasionally, they’re the result of auditions, which we have every few years because we know the talent pool is expanding. These are people that I just want to hang out with. Chat with. Laugh with. If it’s someone you want to hang out with, an audience will to. And we’re fortunate to live in the Twin Cities, where that’s a large pool of people to choose from. They fit an entire rooftop bar after some sort of award ceremony.

Each rehearsal starts out the same: There’s about a twenty-minute table discussion, current events, what you did last night, YouTube videos you want to show off. Rehearsal “starts,” but the talk keeps happening. Ideas generate, bonds are formed, scenes are improved. I’m from a sketch background, so I adore this process.

It’s a process that allowed me to meet this cast: Kelsey, Sulia, Allison, Lauren, Emily, and Heather – as well as Andy and Brad, who’ve both been my co-stars and producing partners for years. It was a pleasure to work with them then, it’s a pleasure to work with them now. Even this week, scenes have shifted, new punchlines have been created and tears of laughter have flowed. From me. There was just a killer joke created from a series of ally-oops from the entire group that’s going to end up in the show, time permitting.

At this point in the rehearsal process, what resemblance does the current script bear to the original that you started rehearsals with?

Coming from a sketch comedy and improv background, these shows are being written up to and even past opening night. I like to encourage my casts to talk and toss out new jokes or new lines, always trying to find the best possible laugh you can.

You’ve mentioned a number of ways that cast are being invited to share things – do you ask them to experiment and improvise around the edges, or is this more of a writer-driven writing process?

When you have such a smart and talented cast, it’d be a shame not to utilize them every way you can. Portions of the script this year were intentionally left open-ended so we could riff and create something together. We keep the outline and story beats intact, but the path from A to B can shift ever so slightly, and usually for the better.

I definitely encourage experimenting and throwing things out there. You discover jokes you didn’t even realize were there that way. It’s similar to a writer’s room for a sitcom or variety show in that regard. Even if someone in the cast doesn’t consider themselves a “writer” necessarily, they still bring their point-of-view and ideas to the table, and that can be used to sharpen a joke or find a new one entirely. And who knows? If their joke or bit ends up hitting, we may have just created a new Fringe monster like that clueless kid from 2002 that apparently thought himself the next Kevin Smith. (He grew out of that though. Mostly.)