Erin Roberts is the star of My 4 Bodies, a solo show at the 2018 Minnesota Fringe Festival that delves into stress, illness, pressure, and loneliness. Naturally, these issues exist entirely in the world of environment and have no real-world foundations or applications. Roberts spoke with the Arts Reader‘s Basil Considine about her career and how she was sucked into the world of this play. 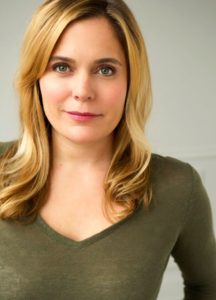 You went to school in Massachusetts and Pennsylvania, and did some work in New York – how did you end up in the Twin Cities?

This is a long complicated story, but the short version is that I was living in acting in New York City. I had stayed in touch with two very good friends of mine from the Shakespearean Theater of Maine since we had last worked there in 2003. They were East Coasters themselves, but had moved to Minneapolis and started their own theater company. Then, in the summer of 2014, I received a text from my dear friend Meg, asking if I wanted to do a show with them.

Things had become a little slow for me in New York, and some personal issues were up in the air, so I said “yes” and moved out here November 1, 2014. What was meant to be a 5-to-6 month gig has turned into three-and-a-half years. So far so good.

Show Description
A woman with multiple sclerosis and juvenile diabetes tells her life story in 4 parts, finding she needs to integrate the physical, mental, emotional and spiritual to accept herself and true love in her life.

You mention in your bio that you’ve appeared in a few running commercials. Naturally, inquiring minds want to know: how did you end up cast in these?

I work with Talent Poole, a talent agency in the Twin Cities that helps procure auditions and book voiceovers and commercial shoots. You can see clips of my work on my website, http://www.erin-roberts.com.

Most actors do a fair number of odd jobs in their careers – some onstage and some off. What’re some of yours?

It’s very true – as actors, we become Jacks-and-Jills-of-many-trades. I have had the pleasure of doing a tremendous amount of odd jobs in my life. I have been a nanny, a dog walker, a telefundraiser, a substitute teacher, a personal trainer, a swim and ski instructor, a camp counselor, a professional mascot, a bartender, a hair model, a blogger… (I feel like I’m missing some.)

When did you do your first show in the Twin Cities? What was your role and what company was it with?

My first show in the Twin Cities was Defying Gravity with Swandive Theatre in January 2015. It’s a surprisingly interesting and uplifting play about the Challenger space shuttle explosion. I played Christa McAuliffe, who was chosen to be the first teacher in space.

When did you first hear about the Minnesota Fringe Festival? When did you do your first Fringe show, and what was it?

I had heard about the MN Fringe festival since moving out here in 2014.

When did you do your first Fringe show, and what was it?

I was privileged enough to work on a show in 2015 called Leaving Saint Paul. It’s a true story about a Saint Paul real estate agent who ultimately gives up his career and the security of his family to help integrate neighborhoods in the 1960s. It was written and produced by the man’s daughter, Barbara Teed, and has since been developed and was read at the History Theatre this last winter.

My 4 Bodies is a solo show – is this your first experience doing a solo play?

This is my first time doing a solo show, it’s always been a bucket list thing for me but it’s also terrifying!

How did you end up connected to this production?

I had done a short film with playwright Patricia Fox last summer and we hit it off. Consequently, I was playing her in that short film…and will be playing her again in this autobiographical one-woman show.

What’s a favorite aspect of My 4 Bodies?

The show examines the four parts of a human being, the emotional, physical, mental, and spiritual bodies that make up one whole person…And examines what happens when one of the four is not as complete as the others.

Tell me about your character in the show.

I actually play Patricia, the playwright, as she goes through the joys and traumas of her life dealing with physical illness and emotional stress, mental pressure, and spiritual loneliness. I think of it as a love story finding your soulmate in the outside world and within yourself.

How would you describe the experience of seeing My 4 Bodies?

Going a little further, I think it’s about personal stories that people can relate to. Everybody’s gone through tough/embarrassing/fragile moments in life. Everyone has to look at the hand that they’re dealt and ultimately learn to live with it and ultimately love it. We are infallible. Material things mean nothing. Everything changes.

When we can finally realize and be comfortable with that fact, we will be at one with ourselves.

Who should come see it?

I think it’s a show for everybody adult, or perhaps PG-13, as there are some difficult stories that might contain personal triggers. There is some explicit language, and discussion of the Buddhist faith.

What’s coming up for you after Fringe?

Immediately after Fringe closes I’m excited to attend a screening of the short film I did with [playwright] Patricia Fox, 100,000 Miles a Second, at the Square Lake Film and Music Festival in Stillwater, Minnesota.

Later in the month, I will be traveling to Asheville, North Carolina, to see two dear friends of mine get married and hopefully get to go back East to see some Boston baseball, swim in the ocean, and have some lobster with my family. Then, in the fall, it’s back to teaching and auditioning (i.e., the hustle that is the constant awesomeness of this business).